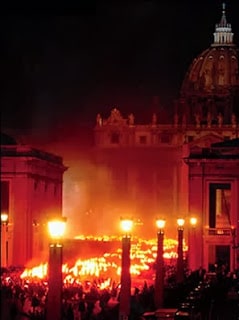 Italy has many special Christmas celebrations, but there’s one in the region of Molise that may be among the most unique. The ‘Ndocciata, or torchlight parade, takes place on December 8 and 24 in the town of Agnone. It is the largest celebration of its kind in the world.

The ndocce are 6- to 8-foot-high torches made of silver fir pine and white bundles of dried broom held together by twine. They are carried by people wearing black, with a hood or hat, carriers wear black complemented with a hood or hat.

Groups from the towns various districts parade down the streets and compete to have the best ndocce. There are singers and bagpipers and the bell of the Church of San Antonio rings. Agnone is home to one of the most famous bell makers in the world. The locals call the procession a “river of fire.” 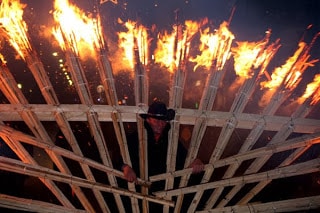 The festival dates back to the time of the Samnites (pre-Roman times). The Samnites uses ndocce as a source of light during the strategic tribal shifts that occurred at night. Later farmers incorporated the tradition to light the way to help them reach town churches on Christmas Eve.

“Different traditions have been reflected in Ndocciata over the years, for example, if the wind blew from the north during the bonfire it was expected to be a good year. During medieval times, a roaring fire from the torches was thought to help overcome witches,” according to Wikipedia.

Thanks to our friends at Kolidur Travel Club for telling us about ‘Ndocciata.