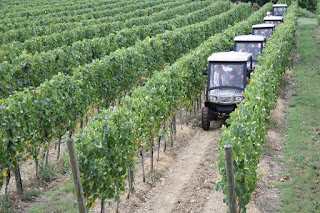 This is an excerpt from the June/July 2013 issue of Dream of Italy:

Some wineries innovate with art, and others with science. Castello Monte Vibiano Vecchio near Perugia belongs to the latter category, as the first in Italy—and among the first worldwide—to reduce its carbon footprint and be certified as having reached zero greenhouse gas emissions.
Monte Vibiano, part of an estate including a castle and farm owned by the Fasola family since the late 1800s, began its mission to manufacture sustainable wine and olive oil in 1998. Just a decade later, CEO Lorenzo Fasola Bologna announced their 360° Green Revolution campaign, tailoring their business model to the goal of reducing the environmental impact of their wine and olive oil production. By 2009, the farm had achieved that goal and just this year received their second zero GHG emissions certifications for their farm and their products.
How does all this science translate into the glass and onto the plate? Quite well, as it turns out. Working with Fasola Bologna’s philosophy that “a clean environment is the starting point for the highest quality wine and olive oil”, their L’Andrea DOC red (a blend of Sangiovese, Merlot, Cabernet Sauvignon and Syrah) has consistently won international awards and their signature single-serving 10 mL unfiltered extra-virgin olive oil is featured at some of the most prestigious restaurants worldwide.
Travelers can judge the quality for themselves, as Monte Vibiano offers eco-tours to those curious to visit their cellar, learn about their revolutionary viticulture practices, drive their environmentally-friendly electric vehicles through the rolling vineyards, and—most importantly–stop in their chic new Green Wine Bar to sample the family’s wines and olive oil. In the words of Fasola Bologna, “My family and I feel privileged to wake up everyday to the beauty that is Umbria. We feel passionate about sharing this beauty and ‘green’ concept with everyone.” –Rebecca Winke
Paid subscribers can also read about this new, architectural stunner of a winery in Umbria… 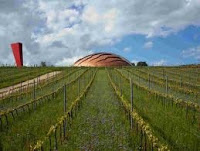