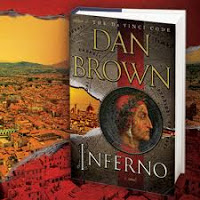 He’s back….well, actually “they’re back.” Author Dan Brown and his lead character (of The DaVinci Code and Angels & Demons fame) art historian Robert Langdon (you might remember Tom Hanks played him in the movies) are back with a new book Inferno.

The plot revolves around Langdon trying to stop the spread of a deadly virus, while using clues found in the passages of Dante Alighieri’s 14-century epic poem, The Inferno. Of course, that means, Landgon’s back in Italy – Florence and Venice to be exact. Brown’s book have sold have sold more than 200 million copies worldwide so travel companies have taken note of his latest release, linking their tours and packages to the new book.

In Florence, Artviva (made our list of Italy’s best tour guides) will take Brown fans on a three-hour tour of Florence, highlighting Langdon’s path and the legacy of Dante. “We reveal insider insights provided by the only living being referred to in The Da Vinci Code, Maurizio Seracini. Also featured in Dan Brown’s latest novel, “Inferno.” the work of Seracini has long been supported by Artviva as he seeks out the lost Da Vinci. “Hear about his study into the Vasari masterpiece that forms one of the biggest mysteries of Dan Brown’s Inferno,” the company says.

If you are more interested in touring on your own, our friend Martha Bakerjian, the Italy guide for About.com, has put together a list of 10 Venice and Florence sites featured in the plot of Brown’s Inferno.