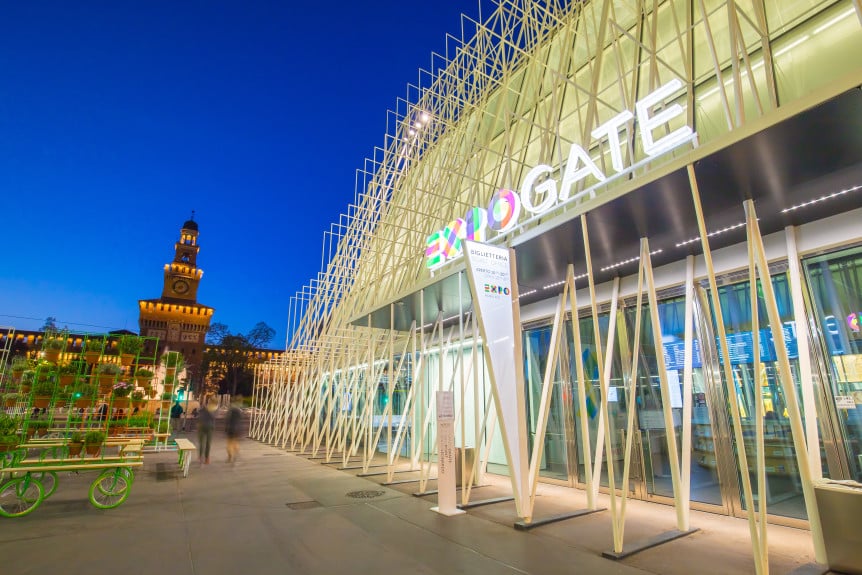 Since the publishing of this article, the EXPO has finished.

In 2015, what used to be called the “World’s Fair” and has since been termed a “Universal Exposition,” will take place in Italy. Expo Milano 2015 promises to be a dynamic event in every way, from its theme of Feeding the Planet, Energy for Life to its permanent footprint on the urban landscape.

Keep in mind, as you plan your travel to Italy this year, that the Expo is itself a destination and worth a day or two of exploration, and a reason you might want to put Milan on your itinerary (or give it a pass, if you’d like to avoid the crowds!).

World’s Fairs — or Universal Expositions — began in 1851 in London, and until 1940 a fair was held in countries around the world (there was a hiatus, probably due to World War II, from 1941 to 1948). The city of Milan was previously host to a World’s Fair in 1906 celebrating the Simplon Tunnel connecting Switzerland and Italy through the Alps. In 1967, when the event was based in Montreal, the name was changed to “Expo,” and that’s what Milan’s 2015 “World’s Fair” will be titled.

From May 1 through October 31, 2015, Expo Milano will focus on “Feeding the Planet, Energy for Life” — the first Expo to focus on food rather than a new product or technological innovation. Milan’s Expo, like its predecessors, will offer information, foster connections between nations, and provide entertainment and refreshment, all of this in keeping with the theme.

Expo Milano’s goal is to spark global discussion about healthy food for everyone. There are two challenges: One, approximately 870 million undernourished people worldwide; two, about 2.8 million deaths from diseases related to weight problems. For the first time, the Expo will not simply exhibit human progress, but will offer opportunities for nations, organizations, and businesses to cooperate on solutions to these problems.

This year, the 147 participating countries (as of press time) will not be arranged geographically, but by clusters of dominant agricultural production, such as Rice: Abundance and Security; Cocoa: the Food of Gods; Coffee: the Engine of Ideas; Spices: the World of Spices; and even Arid Zones.

Visitors shouldn’t worry that all of this high-concept reorganization will seem dry and academic; there’s lots about the Expo that is pure joy. The site (about half an hour northwest of Milan) will be fashioned as an ancient Roman town, with main streets, a Forum, a canal, and shaded areas. A children’s park will feature Expo Milano’s mascot, “Foody,” along with 11 other characters.

With so many ideas and events centered on food, the fare available at kiosks, restaurants, and cafes will also be noteworthy. From a pop-up James Beard American Restaurant (it will even serve a Thanksgiving dinner menu and a Gospel brunch) to six food trucks, even the American offerings may delight sophisticated European palates. The Italian pavilion includes Michelin-star-winning chefs like Davide Oldani, Moreno Cedroni and Ernst Knam (the “king of chocolate.”)

The most interesting participant may be Massimo Bottura, whose Osteria Francescana in Modena has been listed in the Top Five of The World’s 50 Best Retaurants since 2010. Bottura, mindful of the Expo’s theme, thought about all of the leftovers that usually pile up from events like this — and designed the Refettorio Ambrosiano or “Food for the Soul,” as a restaurant serving a menu made up of those.

Famous designers like Mimmo Paladino and Patricia Urquiola have donated time to renovate the space, a former theater connected to a Milan parish in Greco, and furniture companies like Riva, Kartell and Alessi, are donating the tables and chairs and accouterments. Chefs from Rene Redzepi to Alain Troisgros to Daniel Boulud will serve meals to students at lunch and people in need at dinner. (Once the Expo has closed, the space will be maintained as a place for the needy and underserved.)

“Made of Italians” is another unique aspect of Expo 2015: Italians living abroad and all foreign citizens of Italian origin receive a 25% discount on Expo tickets as well as a special promotions on train and flight tickets, hotels, restaurants, exhibitions and shows and free or discounted entry to selected museums in Milan and in main Italian cities.  To participate, visitors must register online at www.madeofitalians.expo2015.org.

Expo tickets may be purchased online at www.expo2015.org and tickets bought before May 1st are discounted.  A one day, open date ticket for an adult (14+) is 32 euros and a fixed date ticket is 27 euros. After May 1st the prices are 39 euros and 34 euros, respectively.  There are various prices for students, seniors, families, young children, and disabled visitors as well as multi-day tickets, season pass, and evening tickets.

A good online magazine to browse regularly (it’s updated daily) is www.magazine.expo2015.org/en.  Be sure to download the free app at www.expo2015.org for the most updated information and see the virtual tour of the grounds available on the same website.

A Renaissance for Milan

Visitors who may decide to shun the Expo entirely and remain in the centro will be forgiven, as the Milanese have ensured that every neighborhood is in tip-top shape — there’s a lot going on in this chic and dynamic city!  Here’s a quick snapshot of what’s happening:

The Milan tourist office has redesigned its website www.turismo.milano.it, now an excellent resource. Visitors may download the 48-page Milano: Guide to the City, as well as apps for the Expo, gay life, Leonardo da Vinci, museums and one on the navigli (canals). Browsers will also find various itineraries, such as “Not to Be Missed in Milan” and “Milan From Above’” as well as 18 themed walks including one on Liberty architecture and others focused on film, food, Italian Futurism and courtyards.

New projects are underway at the Duomo, among them a restoration of the cathedral’s indoor spaces, structural work on the spires; a new lighting system; the newly renovated Museo del Duomo in the Palazzo Reale with the magnificent Modellone, a wooden model of the Duomo dating from 1519; and a sculpture exhibit on the rooftop terraces, which will now be open every day with extended hours.

On the piazza, a reproduction of the barge that brought marble from the quarries of Candoglia at Lake Maggiore to build the cathedral is being constructed (the barge traveled along the navigl — canals – that led to the construction site).

Though these Duomo projects were slated for completion in time for Expo, the truth is that work never seems to stop at this enormous edifice, the fifth-largest Christian church in the world, which boasts 200 bas-reliefs, over 3,600 characters in its 55 stained-glass windows, 135 spires, and 96 gargoyles, and took six centuries to build. Thus the Milanese expression, la fabbrica dal Dom (“building the Duomo”) was born, and it refers to any project that seems complicated and hopeless, with no end in sight.

Galleria Vittorio Emanuele II — often referred to as il salotto di Milano (“Milan’s drawing room”) — is in final stages of a complete restoration (due to be finished in April), and the publisher Feltrinelli Editore and fashion designers Versace and Prada are contributing to the cost. Mario Prada opened his first store in the Galleria in 1913, and the house of Versace was founded in Milan in 1978 and opened a new boutique in the Galleria in the fall of 2014, so it seems fitting that these companies are helping the effort.

Part of a signature redevelopment project, the two Bosco Verticale towers, designed by architect Stefano Boeri, opened to residents last fall and was a finalist in the International Highrise Award 2014, given by the city of Frankfurt, Germany. These mostly-residential-but-also-mixed-use buildings are very near César Pelli’s Unicredit tower near the Porta Garibaldi train station in the Porta Nuovo area, and are called the Vertical Forest because they feature 900 trees and over 2,000 plants from a range of shrubs and floral plants. The plants filter dust, pollen, and pollution and they serve as sun shields in the summer and as weather shields in winter, reducing air conditioning and heating costs.

For the first time in its history, the La Scala opera house may remain open continuously, with a concert, ballet, or opera performance every night, from May 1st to October 31st — the word “may” is key as there is a union dispute over opening on May 1st, traditionally the labor day holiday.  Stay tuned for the outcome — Turandot is set to inaugurate the six-month Expo season.

The Piccolo Teatro della Citta di Milano, the second most important theater in Milan,  will also be offering an extended program. “The Semester of Expo 2015” will highlight over 250 shows from May to October in its three auditoriums and its Nina Vinchi Renaissance Cloister will remain open throughout the month of August with programs for adults and children, including the renowned Carlo Colla & Sons marionette company, founded in 1860.

In addition to hosting a number of excellent special exhibitions, Palazzo Reale is hosting Italy’s largest retrospective of the works of Leonardo da Vinci, who enjoyed the patronage of Duke of Milan Ludovico Sforza (who commissioned “The Last Supper’) and spent a number of years in Milan. Divided into 12 sections, “Leonardo: 1452-1519,” runs from April 15 to July 19, 2015,  and will include paintings, models, sculpture, manuscripts, etc. and a video reproduction of “The Last Supper” and its lengthy (20-year) restoration.

Additionally, the Pinacoteca Ambrosiana and the Bramante Sacristy in the Convent of Santa Maria delle Grazie continue to exhibit the Codex Atlanticus, the world’s largest collection of the works of da Vinci.  Since 2009, the 1,119 pages of the Codex — originally bound into twelve volumes — have been unbound and on display, about 44 or 45 pages at a time for three months’ time (the longest the documents can be exposed to light).

As part of Expo in the City, museums all over Milan will remain open until 11:30 p.m. for the duration of Expo, and there will be 14 pavilions of art showcasing paintings, architecture, music, and literature at venues around the city. A few highlights include:

Barrie Kerper, the author of The Collected Traveler series of guidebooks, served as guest editor for our special report on Lake Como (December 2014/January 2015) and special reports on Italy’s best cooking schools (August and September 2014).