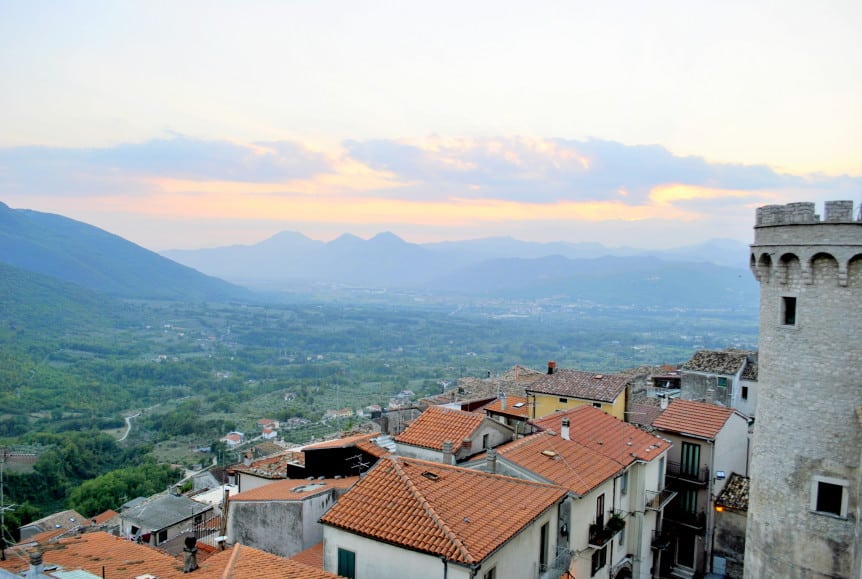 This article originally appeared in the September 2012 issue of Dream of Italy. Updated 2018.

It would seem that every region of Italy has been fully explored and is brimming with visitors wanting to discover ancient history or escape to a countryside retreat — but, as ever, there is still more of Italy to uncover. Molise, the country’s last undiscovered region, is as rich in history as it is in beauty and, unknown to both Italians and foreigners, it is free of the crowds and traffic that fill other regions. The 20th region in the country, Molise was part of the region of Abruzzo until it separated in 1963 and officially went solo in 1970.

About 100 miles southeast of Rome and 56 miles northeast of Naples, Molise is a small region (the second-smallest in Italy, following the Valle d’Aosta) where green hills of the Apennine mountain range surround valleys cradled between forested peaks. In the eastern part of Molise lies 21 miles of coastline on the Adriatic Sea, where visitors can swim, relax on beaches, go boating and tour islands.

The mountainous region experiences all four seasons, with warm summer nights lasting well into September and snow descending on the hills by November. Because Molise’s climate is unsuitable for grazing animals in the winter, shepherds have traditionally used paths called tratture to move their animals to greener pastures at the end of summer and the start of spring (although shepherds used to travel these routes on foot, the practice continues today using modern vehicles). The tratture remain a defining feature of the Molise landscape, and the transhumanza (meaning “crossing the lands”) has shaped the region’s history and culture as an agricultural area.

Molise comprises two provinces (Isernia and Campobasso, with capital cities of the same names) and a collection of small villages, each with something different to offer. Like the shepherds conducting their twice-yearly ritual, life here moves at a slower pace to different rhythms. Here family-trained artisans and a stunning array of local products for such a small area are the norm.

In Sepino, wandering among ancient ruins of a Roman town that flourished in the 2nd century BC gives visitors an idea of how the transhumance defined villages in Molise centuries ago. Sepino’s location along the grassy tratturo roads meant that it was a main thoroughfare for shepherds looking for food and commerce. The town was founded by the Samnites, an ancient and little-known population group who battled the Romans for control of the area — often victoriously — before finally succumbing in 293 BC. Although the majority of the Samnites were killed in an ethnic cleansing by a Roman leader in 82 BC, their legacy can still be found in the ruins. When peasants arrived in the 18th century, they used some of the fallen stones to build houses, which stand intact next to outlines of ancient shops, baths, and walls. Sepino, framed by four gates, contained an amphitheater used for Roman plays and a large public piazza. Today, Sepino is a functioning town whose ancient framework intermingles with modern homes.

At the Marinelli Bell Foundry in the town of Agnone, one of the world’s oldest crafts — the making of church bells — is on display. The foundry, established in the 14th century by the Marinelli family, is still a working factory that crafts custom church bells. Customers specify a design and a note that the bell should play, and then a bell is crafted out of a mold of brick and clay with wax-casted decorations imprinted on the mold. To ensure that the bell will play a certain note, craftsmen carefully measure the height, thickness, and diameter of the bell; making the bells is a three-month process.

Once the molten bronze cools, the bell is ready and is dedicated in an emotional religious ceremony and celebration. On an exclusive tour of the factory, a craftsman played Christmas carols with a mallet on a row of newly minted bells hanging in the workshop; the clanging of familiar tunes established a connection between the instruments and the traditions they facilitate around the world.

Agnone, which was also inhabited by the Samnites, is also known for its Christmas Eve parade of thousands of torches. A national monument, the medieval Gothic Church of San Francesco, holds paintings by local painters dating to the 1500s and a 60,000-volume library. The library’s 2,000 rare books include one of the first color-illustrated books, which has been preserved using egg whites, and the writings of the first inhabitants of the region in 254 BC. These ancient books reveal the lost language of Osca, whose characters are read from right to left.

Pesche, a hillside town whose ancient buildings are made of white stone, appears frozen in time due to its status as a protected historic site. Steep, narrow roads climb the hillside and cut through rows of stone houses with colorful painted wooden doors. The town boasts the best pizza in Molise at Pizzeria Bas & Co, a family-run restaurant whose Neapolitan owners teach pizza-making classes, allowing guests to toss the dough in the air and watch the cheese bubble in the wood-burning oven.

Directly across the valley from Pesche is the stunning Santuario della Madonna Addolorata, a sacred site where Jesus and Mary are said to have appeared to two shepherds’ wives in 1888. Since then, it has become a pilgrimage site for Christians, and the shrine was completed in 1975. The sanctuary’s tall, sharp spires and elaborate decorations are a contrast to the flat stone buildings found elsewhere in Molise, and its hilltop location offers a base for hiking or a spot to relax and admire the views of the green mountains. Visitors can tour the church or stay at the sanctuary’s hostel and listen to live music in the summer.

In between the Santuario and Pesche is Isernia, one of the capitals of Molise (the other is Campobasso). Isernia was founded 700,000 years ago and was populated by the Samnites until Romans took power in the 2nd century BC. Isernia is situated on a rocky limestone hill between the Carpino and the Sordo rivers.

Despite being attacked several times throughout history, Isernia was regarded as a place of importance in its history and its historical center remains largely preserved. It is known for the Fontana Fraterna, a 13th-century fountain made from stones from Roman ruins. The city has 22,000 inhabitants and, like other towns in the region, relies on agriculture and local products.

Letino, a town bordering the Campania region, was settled 500,000 years ago by Neolithic humans, who came to the town for its warm climate. The mountaintop town, one of the highest in Molise, built on the Matese massif, overlooks a sparkling man-made lake.Those who climb up to the top of the mountain are rewarded with the 9th-century white stone Castello di Letino and a 360-degree view of the valley.

Partway down the mountain are the recently excavated Caves of Lethe, where lush, green ferns and vegetation grows so thick it resembles tropical flora. A series of staircases leads into the caves, which are naturally carved by water and are home to a unique species of bats.

Dogwood trees grow wild near the caves, offering their sweet-tart deep red berries (known as corniolo in Italian) as a treat to those who reach this little-known place. History and traditions thrive in this untouched, remote town, whose people — descendants of ancient populations — retain elements of their culture that have existed for centuries.

Wild animals in Molise include wolves, sheep, and deer, and the Montedimezzo National Park rescues and rehabilitates birds and deer before releasing them into the wild. If the animals cannot be released back into the wild, the forest service strives to create an authentic natural environment for them. In the forest, a fence surrounds a vast swath of forest where deer can roam, and an underground tunnel connects the shady forest to a wide, sunny meadow where the deer can graze and run.

Originally owned by a noble family, the park was purchased by monks in the 16th century after a fire swept through the area. The monks later sold the park to the Bank of Napoli, who then donated the land to the government in 1924. Dense forests and open meadows in the park provide a quiet, peaceful place for hiking and picnicking.

Molise’s history and traditions have ensured that its high-quality products — including olive oil, chocolate, and wine — are manufactured by regional natives and experts using time-honored methods. Here are some examples of Molise’s fine tastes:

Founded by farmer and vintner Angelo D’Uva in the 1940s, the namesake winery today produces 80,000 bottles of red and white wine annually from grapes grown in soil rich in limestone and clay, in the vineyards of Molise’s lowlands. Their eight wines capture the flavors and traditions of Molise, and include a warm, spicy Cabernet Sauvignon; a fresh and fruity Trebbiano-Chardonnay blend; a sweet and spicy Montepulciano, a popular regional wine; and dry but smooth and fruity Tintilia, a local specialty made from grapes that have grown in Molise since the Spanish domination of Italy began in the 16th century.

Imported cocoa beans from Africa and Central America are mixed into a secret blend to produce premier dark chocolate at Dolce Amaro, one of the country’s major chocolate producers and exporters, based here in Molise. Dolce Amaro manufactures fair trade chocolate with 60%, 80% and sugar-free cocoa, as well as almonds covered in tropical-flavored white chocolate and other confections. The family-owned company has produced chocolate since 1975, and founders Rosa Papa and Pietro Antonio‘s passion for quality chocolate has been passed down to their sons and current owners Claudio, Silvano and Paolo.

Caseificio Di Nucci, Agnone’s cheese factory, is run by the Di Nucci family, who have been making cheese for 10 generations — some even made cheese wearing a suit and tie! Di Nucci has been producing cheese for 350 years and uses a method called pasta filata, a means of stretching the cheese curds, to make varieties such as mozzarella, ricotta, scamorza and caciocavallo.

Caciocavallo translates to “cheese on horseback” and is so named because, when it is aged for eight months, it is hung over racks like a saddle on a horse. A medium-soft cheese with a slightly crumbly texture and mild taste, it is a regional specialty in Molise; during the aging process, an organic green fungus from the penicillin family grows on the rind, giving the cheese its flavor.

The shop also makes stracciata mozzarella, meaning that the creamy mozzarella cheese is produced in stretchy, torn strips and not in balls. Cows graze on the region’s medicinal grasses and herbs, giving the cheese and milk its flavor. The Di Nucci family has received special permission from the European Union to continue using the traditional cheesemaking method with unpasteurized milk and wooden containers (the EU banned the practice in favor of modern methods using steel containers and pasteurized milk, as the traditional method is more costly and complicated). Caseificio Di Nucci is the official cheese supplier of the Vatican, and the Pope is a loyal customer.

Molise is the second-largest producer of truffles in Italy and is known for white truffles and scorzone truffles, which grow during the spring and summer. The town of San Pietro Avellana, considered the “home of the white truffle,” hosts a truffle festival on the second Sunday in August.

The region’s white truffles grow during the spring and are similar to those famously found in Piedmont. Molise’s pristine environment and unspoiled forests in the alto Molise (upper Molise) region provide ideal growing conditions for white and black truffles, while its remote location has kept its status as a truffle center largely secret.

Among the green forested mountains and valleys of Molise is a hidden world rich in culture, history, and tradition. A visit to Molise transports travelers to a part of Italy that is defined by its past but awaiting its future.

Get details on the places mentioned above and where to stay and eat in Molise.