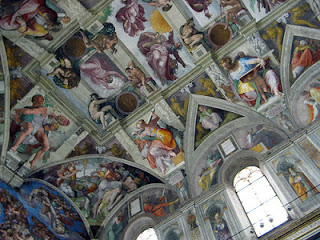 Pope Benedict officially retired yesterday, after giving a farewell audience to 150,000 or more at St. Peter’s Square on Wednesday and then, yesterday, departed by helicopter to Castel Gandolfo, the papal retreat in the Alban Hills outside Rome.

In a detail that speaks to the way we live now, the Pope sent out a final papal tweet (“Thank you for your love and support. May you always experience the joy that comes from putting Christ at the centre of your lives.”) on his last day in office. The Twitter account (@Pontifex  had only recently launched, back in mid-December, with tweets in a number of languages, including Latin. Pope Emeritus Benedict’s tweets have been archived at this link; the papal Twitter account is expected to resume when a new pope has been installed.

What happens next? The conclave, the gathering of cardinals during which they elect a new pope, is expected to convene next week, but as of today there was no official announcement from the Vatican. There is considerable urgency around selecting and swearing in a new pope by Holy Week, which commences on Palm Sunday, March 24. Cardinals have gathered in Rome, and will start their general congregation on Monday, March 4, during which the group will plan out the conclave. This morning, the Vatican press office emphasized that the conclave was not expected to start before March 8.

One thing is sure: the Sistine Chapel will close to the public at least four days ahead of the start of the conclave, so the Vatican can make all the necessary security and logical preparations. Giovanni Tanoni, a popular and respected Vatican guide (and one of Dream of Italy’s top tour guides, featured in our February print newsletter), predicts that the Sistine Chapel will close as early as this Thursday, March 7, though he emphasizes that at this point this is just speculation. His expectation is that the conclave will start on March 10 or 11.

Tanoni noted that the Vatican Museums will remain open throughout, barring any departure from recent conclaves. So, this is important information for anyone planning on doing any sightseeing at the Vatican as things unfold. The conclave will open with the cardinals gathered for a Mass pro eligendo Summo Pontifice, as it did in April 2005, for the conclave the elected Pope Benedict. And then the waiting, and the watching, begins.

Dream of Italy will update readers throughout the coming weeks. — Barbara Benham