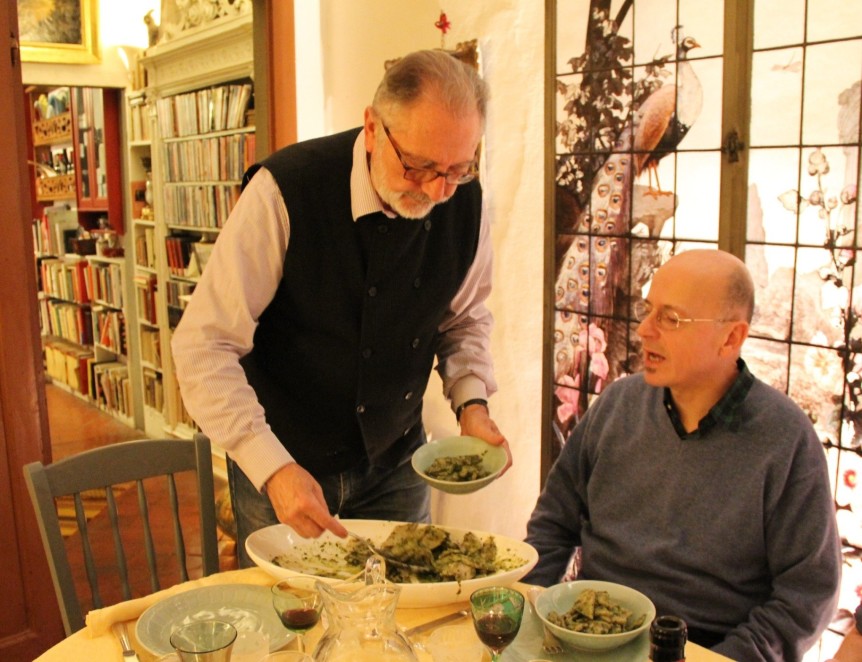 I had been trying to attend a Home Food (now called Le Cesarine) meal at a private home in Italy since I first learned of the organization in the winter of 2005. Somehow the stars never aligned until this past fall when a dinner in Florence fit perfectly in my schedule. And may I say, it was worth the wait?

Le Cesarine is a nonprofit cultural association that seeks to protect and promote Italy’s gastronomic heritage. It was founded by Egeria Di Nallo, a sociologist as the University of Bologna, and is supported in part by the Italian Ministry of Agriculture. A network of guest cooks (cesarini — meaning “little Caesars”) welcome Italians and foreigners alike into their homes for lovingly prepared meals featuring traditional regional recipes (usually passed down through the families of the cesarini) and local ingredients.

“Home Food’s mission is based on the idea that good traditional food can be a tool to build up and preserve a culture,” says director Cristina Fortini. It is a unique opportunity to connect with local Italians (most speak fluent English) and enjoy an incredible meal.

I had been receiving the Le Cesarine emails with their schedule of meals (mostly dinners but sometimes lunches) for the coming months. Le Cesarine has 20 to 25 meals planned each month during the summer, fewer at other times of the year. Though there are now cesarini in many parts of Italy, the most popular offerings are in Bologna, Rome and Tuscany.

I chose a dinner called “The cooking: a passion born from love, like anything else in life, with Giovanni in Florence” and paid online for both a required membership and the dinner. Fortini contacted me to find out if my mother (who would be joining me) and I had any food allergies, as she could make sure Giovanni accommodated us. A few weeks ahead, she sent me Giovanni’s full name, address and phone numbers.

When the night of the dinner arrives, I admit that I’m a bit nervous. I’ve traveled to Italy dozens of times and been to many Italian homes, so I am surprised by this feeling and should encourage others not to miss a dinner just because it might be a little out of your comfort zone. As we walk through the door of Giovanni’s apartment into his book-lined entrance hall, all nerves fade with a warm welcome by Giovanni, a tall, older, bearded gentleman, and his friend, Jacques, both of whom speak impeccable English.

They escort us into the colorful, antiques-and painting-filled living/dining room where a fire is blazing in the fireplace, and two other Le Cesarine guests, newlyweds Linda and Richard Parks from Dallas, are waiting. As we gather around Giovanni’s table topped with Asian-inspired, antique plates and stemware, I pick up the evening’s program and menu sitting next to my plate and read a bit why Giovanni is our host tonight:

“Everything started many years ago when, almost aged thirty, he decided to leave his home in the province, in his native city of Carrara, that had become too much narrow to end there his exploration of life, and to arrive in Firenze, a city of wide breath. Here, firstly he became a student of a small private school of restoration, supporting himself in a rented flat by doing his previous job, and then he also met people who changed and enriched his new life. In fact, an artisan friend of his preciously taught him and the figure of a French woman initiated him into the cooking. Therefore, to the question that asks him from where his passion for cooking was born, he answers: ‘Like everything in life, it originates from love.’”

The selection process for a cesarina (female) or cesarino (male) is rigorous and administered by the director and an admission committee. At the suggestion of a friend, Giovanni contacted Le Cesarine. Fortini interviewed him on the phone about his love of food and then came to Florence for an in-person meeting. Along with other members of the admission committee, Fortini visited Giovanni’s home for a meal, evaluating the setting, the menu, how he cooked and interacted with the guests. He passed a most difficult test.

Our traditional Tuscan dinner begins with crostini di fegatini (chicken liver on bread) which Giovanni prepares in his unique way, as more of a pate with capers, garlic and some Pecorino cheese. As we sip a local red, Giovanni retreats to the kitchen and returns with a piping hot platter of testaroli topped with pesto. Testaroli is a simple, ancient pasta made with flour, water and salt (no eggs) that is popular in Giovanni’s hometown of Carrara, but hard to find here in Florence.

Our conversation is just as appetizing as the food. We learn more about Giovanni’s friend, Jacques, who is a librarian at Palazzo Strozzi and also teaches Italian film classes to American students at Middlebury College’s study abroad program in Florence. Linda and Richard share tales from their honeymoon so far in Italy and Richard explains he studied Italian in college and that’s why he wanted to come back to Italy.

As Italian President Silvio Berlusconi is about to resign from office, Giovanni and I discuss just how bad the Italian economy is. We all share favorite books (including Mary Taylor Simonetti’s books on Sicily), movies (the Italian film Pranzo di Ferragosto, which was recently released with subtitles in the U.S.) and places to visit in Italy.

Our main course is scamerita, a cut of pork between the neck and shoulder. He tells us how he has baked the scamerita for two hours in white wine, olive oil, whole garlic and rosemary. The sides are spinach as well as wine-soaked pears. The pear theme continues with homemade pear sorbet and a pear tart. Giovanni serves sweet Marsala wine and also brings out Pernigotti chocolates. Mamma mia!

But Giovanni has saved the best surprise for last. He walks into another part of his apartment and returns with a framed work of art as a present for newlyweds Richard and Linda. It is an image painted on glass, a copy of a mosaic found in Pompeii showing Ulysses and Penelope in “conjugal affection.” Not wanting to leave me out, he goes inside and returns with a similar but smaller piece of a gold bird painted on glass. All of us are touched and thrilled to have something lasting with which to remember this convivial night.

Register on the website to receive a monthly email of the next month’s scheduled meals around Italy. Since the schedule is only released a month ahead of time, if you are planning further in advance, you might want to e-mail at info@homefood.it to request a particular city and date. Meals generally cost about 65 euros and can be paid for in advance via PayPal.