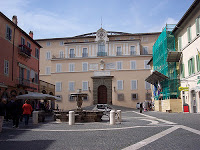 Details about Pope Benedict’s transition to retirement are emerging. On February 28, the Pope will be helicoptered to Castel Gandolfo, the papal vacation and summer residence in the Alban Hills outside Rome. The site, a short train ride from Rome, is popular with pilgrims from around the world who on summer Sundays catch the 8:37 train from Rome to hear the Pope say Mass. In addition to the train, Carrani Tours organizes buses from Rome to Castel Gandolfo.(Their site is under construction, but you can email for details.)

Obviously, Pope Benedict is not expected to make any public appearances during this time, as Rome and the Vatican prepare for the influx of cardinals who will participate in the conclave that will select a new pope. The next pope of course will use Castel Gandolfo as a vacation residency, and the tradition of Sunday Mass will then resume. Castel Gandolfo is larger than Vatican City by 11 hectares (approximately 27 acres) and is made up of gardens and farm tracts and several residences, including the Papal Palace and the Barberini Palace, which houses employees.

According to the Vatican website, the property also includes: “buildings in the Villa Cybo set aside for the religious community of the Maestre Pie Filippini and their school, and two cloistered convents housing the Poor Clare and Basilian Nuns. In the piazza in front of the Papal Palace, the parish house assigned to the Salesians stands alongside the Pontifical Church of St Thomas of Villanova.” After a new pope is installed, Pope Benedict will take residency at the Vatican, in the Mater Ecclesiae Monastery.

“The Mater Ecclesiae monastery was founded in 1992 by Benedict’s predecessor, John Paul II, ‘to create a place to house an international convent for contemplative life within the walls of Vatican City,’ according to the Vatican City State website.

It has housed small communities of cloistered nuns whose main task has been to provide spiritual assistance to the pope and to the Roman Catholic Church as a whole by praying in Latin and singing Gregorian chants.

The nuns would also embroider papal garments and cultivate a small organic orchard and a rose garden next to their residence. In a 2009 interview with the Vatican newspaper L’Osservatore Romano, the monastery’s then abbess said that Benedict particularly appreciated the special-recipe marmalade that the nuns would prepare out of the oranges and lemons they picked in the Vatican orchard. ”

Dream of Italy will continue to post updates on the Pope’s retirement and the events around it, including next month’s conclave. — Barbara Benham