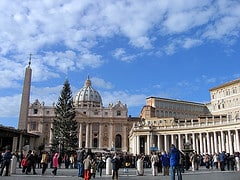 Pope Benedict XVI stunned the world and resigned the papacy today, two days before Lent and seven weeks before Easter, the highest and holiest holiday in the Catholic Church. His resignation, effective February 28, is without modern precedent.

The last pope to resign, Gregory XII, stepped down in nearly 600 years ago, in 1450. The official reason given was Pope Benedict’s advancing age. Speculation regarding the 85-year-old pontiff’s possible successor, as well as any undisclosed medical diagnoses, will likely dominate traditional news and social media outlets for days and weeks to come.

The news has huge implications for visitors to Rome pretty much through Easter Sunday, which falls on March 31. Some are known. For instance, the Sistine Chapel will be closed to visitors during the conclave, the gathering of cardinals charged with selecting a new pope. It is to take place 15 to 20 days after a pope’s death or resignation, which means the conclave will start between March 15 and March 20.  (Last time a pope was elected, St. Peter’s and the Vatican Museums remained open – details from a Vatican insider here.)

The conclave draws thousands of spectators. Cardinals eligible to vote — those under age 80 — are sequestered in the Vatican. Voting takes place three times a day, once in the morning and twice in the afternoon, until there is a two-thirds majority vote. After each vote, the ballots are burned in the Sistine Chapel. Black smoke means no decision. White smoke means the cardinals have made a selection. Bells ring to affirm that a new pope has been selected, to avoid confusion over the ballot smoke’s shades of gray.

Dream of Italy will provide updates, specifically aimed at those planning to visit Rome during this historic transition, as we speak to our network of Rome-based experts, guides and friends over the coming days and weeks. — Barbara Benham