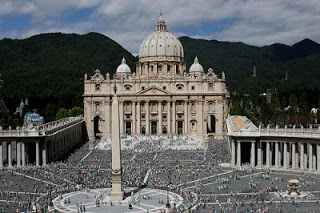 As the world continues to absorb the enormity of Pope Benedict’s sudden resignation and the changes it might represent, one thing is certain: St. Peter’s Square will be teeming between now and Easter Sunday, as Pope Benedict winds down his papacy over the next two weeks and the Catholic Church selects and installs a new pope. Within hours of today’s news, St. Peter’s Square brimmed with journalists and television crews, many of whom are stationed near the Vatican City, as well as a sprinkling of locals and tourists.

Giovanni Tanoni, a celebrated and well-connected guide at the Vatican (and one of Dream of Italy’s top tour guides, featured in our in our upcoming February print newsletter), said it was nearly impossible to walk through St. Peter’s Square within an hour of the announcement. He shared the following observations in a phone call with Dream of Italy earlier today.

Why announce the news today of all days? This is a historic date in Vatican history. On February 11, 1929, the Vatican was recognized as a sovereign state with the signing of the Lateran Treaty, an official recognition by Mussolini of the Vatican and the Holy See’s sovereignty. This followed sixty years of doubt over the Vatican’s status, which was dubbed “the Roman question.” Giovanni thinks the Vatican chose today for this reason, though when we spoke, the press wasn’t reporting as much.

Is Pope Benedict keeping his schedule? As of this afternoon, Pope Benedict was expected to hold an audience this Wednesday and next (February 13 and 20th), as well as the Angelus Praying and Papal Blessing the next two Sundays (February 17 and 24th). Giovanni anticipates crowds will be in the thousands as people want to see Pope Benedict perform his final official acts as pope.

When will the conclave take place? Giovanni says that it’s possible that it could take place the first week of March, but pending an official announcement, this is conjecture, and is earlier than the laws mandate.

Dream of Italy will regularly bring updates about the Pope’s resignation and what it means for people visiting Rome in the days and weeks ahead. — Barbara Benham