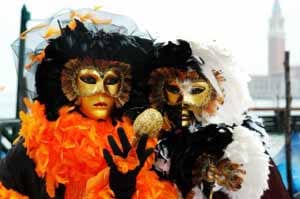 Thinking about a trip to Italy in 2013? Plan your visit around one of these amazing events…

Carnevale in Venice: See the city’s official program of events from January 26 to February 12. The balls are spectacular and expensive. We’ve been to the stunning Ballo del Doge and hear the Bauerlesque Ball is a hot ticket this year.

Pietro Bembo in Padua: A celebration of the Italian Renaissance scholar Pietro Bembo includes his personal items and manuscripts as well as art by Titian, Bellini, Mantegna and Raphael. Runs February 2 to May 19.
Faith Art in Rome: 2013 is the Year of Faith as declared by the Pope. There were be a special exhibitition “On the Path of Peter” at Rome’s Castel Sant’ Angelo from February 7 to May 1.

Titian Exhibition in Rome: This eagerly anticipated show of the works of Titian opens March 1 at the Scuderie del Quirinale and runs through June 16.

America’s Cup in Naples: The America’s Cup World Series sailing event will take place in Naples April 16 to 21. A half-million spectators are expected.

Lamborghini on the Roads of Italy: The iconic Italian automaker celebrates 50 years in 2013 and celebrates with a five-day Lamborghini road trip from Milan through Emilia-Romagna. Starts May 7.

Open Cellars: Over 1,000 vineyards across Italy open their cellars during the last weekend of May. A spectacular chance to experience the wines of Italy.

Art Biennale in Venice: Once held every other year, the Biennale  (one of the world’s best international contemporary art shows) is now an annual event. Exhibitions at the Arsenal and Giardini take place June 1 to November 24.
Palio in Tuscany: Italy’s most famous horse race takes place each year on July 2 and August 16

Andrea Bocelli performs in a Tuscan field: The annual one-night only Teatro del Silenzio takes place in Bocelli’s hometown of Lajatico every July. The exact 2013 date has not been announced yet.

White Truffle Festival in Alba:  The greatest white truffles in the world hail from the Piedmont countryside. This fair – held on weekends between October 4 and November 17 – celebrates “white gold.”