In our October issue, Barrie Kerper wrote about two incredible cooking schools in Sicily. Here she shares one of her favorite Sicilian treats and its provenance: 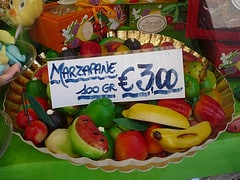 It’s hard for me to accurately describe the creativity of Sicilian confectioners, who shape and color marzipan into incredibly life-like treats – sea creatures, fruits, nuts, baskets, spaghetti, eggs, etc. Marzipan is an island-wide specialty in pasticcerie, but in Palermo it is king.

Its popularity is traced to the Benedictine convent of La Martorana, where the nuns were famous for their pasta reale from about the 13th century. The convent no longer exists, but it was associated with Santa Maria dell’Ammiraglio, commonly known as La Martorana because the convent was founded by Eloisa Martorana.

Dream of Italy readers who’ve been to La Martorana know that it’s a gem – with its stunning mosaics and elements of Byzantine, and Islamic North African architecture – and Arab traveler Ibn Jubayr referred to it as “the most beautiful monument in the world” in 1184. Those who haven’t been yet must put it on their list for a Palermo trip.