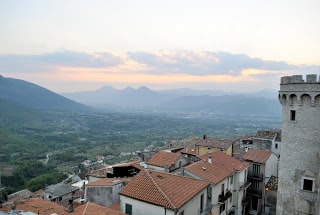 Much of our September issue was devoted to a region we have never convered before – Molise. (As we hit our 10th anniversary, I can now say we’ve covered all 20 Italian regions!) Molise broke off from Abruzzo in 1963 and became Italy’s newest region in 1970.
Located approximately 100 miles southeast of Rome and 56 miles northeast of Naples, Molise is a small region (the second-smallest in Italy, following the Valle d’Aosta) where green hills of the Apennine mountain range surround valleys cradled between forested peaks. In the eastern part of Molise lies the Adriatic Sea, where visitors can swim, relax on beaches, go boating and tour islands.

The mountainous region experiences all four seasons, with warm summer nights lasting well into September and snow descending on the hills by November. Because Molise’s climate is unsuitable for grazing animals in the winter, shepherds have traditionally used paths called tratture to move their animals to greener pastures at the end of summer and the start of spring (although shepherds used to travel these routes on foot, the practice continues today using modern vehicles). The tratture remain a defining feature of the Molise landscape, and the transhumance (meaning “crossing the lands”) has shaped the region’s history and culture as an agricultural area.

Molise is a secret so well-kept that even seasoned travelers and most Italians have yet to visit. Its wildness and low profile lend it a sense of mystery – peer inside the villages and shops, and uncover a hidden region steeped in tradition and waiting to be discovered.

As we detailed in the September issue (subscribe now for immediate online access), Molise is the place to go for those who want a truly authentic Italian experience, especially for those who love the outdoors, plus we’ve found the perfect insiders to show you around…