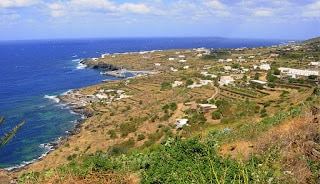 The island of Pantelleria, 58 miles from Sicily and 45 from Tunisia, is on many a person’s wish list, including ours. That said, it’s not as widely known as many of Itay’s other islands, at least not among U.S. travelers. This despite occasional mentions in the U.S. press, often a nod to Giorgio Armani maintaining a vacation home there. One explanation for Pantelleria’s “off the radar” status is it was, until relatively recently, not terribly accessible from mainland Italy. An overnight ferry from Trapani, Sicily, was your best bet.

Today, two airlines, Alitialia and Blu Express, service the island several times a weeks during the summer months. Magically, this inaccessibility works in Pantelleria’s favor in many ways. It’s not terribly developed, with 18 hotels listed on TripAdvisor, which makes for a delightful place for folks who want to get away from it all. There are vineyards to tour. There are no beaches, but you can swim off the island’s jagged coast line. It is, per this WikiTravel entry, a fun place to explore on moped.

To give you a sense of Pantelleria, here’s a sampling of three recent articles: Pantelleria: Italy’s Anti-Capri, Capers {Pantelleria} and The Great Italian Island Caper. You can also read this 2009 account of a visit to Pantelleria on ABC News’ website. — Barbara Benham