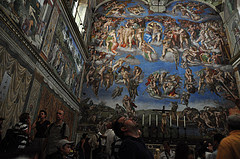 Of the many attractions in Italy threatened by tourism, the Sistine Chapel doesn’t top most people’s list. Of course, as is the case with Pompeii and the Colosseum and many of Italy’s antiquities, it’s fair to say that too much of a good thing can be a bad thing, no matter the venue.

A column in the September 20th edition of the Milan daily Corriere della Sera by Pietro Citati put the spotlight on tourism’s toll on the Sistine Chapel. In the piece, the noted Italian writer and critic suggested that mass tourism was causing so much damage to the Sistine Chapel that the Vatican Museums might one day have to limit the number of visitors.

The response from Vatican Museums was a resounding “no.” Writing this week in the Vatican daily L’Osservatore Romano, Vatican Museums Director Antonio Paolucci stated that any limits on visitors would be unthinkable, according to a summary by the Italian news service ANSA. (Some four million people visit the Sistine Chapel each year.) Paolucci reminded readers that the days where only the elite could view artistic wonders like the Sistine Chapel, with Michaelangelo’s extraordinary ceiling, were long behind us.

Paolucci also noted that the number of visitors to the Sistine Chapel was likely to increase, as standards of living increase in emerging countries and more individuals can afford to visit the consecrated site that is the Sistine Chapel.

While rejecting the idea of limiting visits, Paolucci very publicly quantified the impact of thousands of daily visitors. In 2010 he surprised the world when he announced that workers had removed several kilograms of dust from the Sistine Chapels frescoes after a month-long cleanup of the ceiling. (One kilogram equals 2.2 pounds.) He was quoted widely as observing, “These people sweat, breathe and produce dust – you will be amazed how much dust a human body gives off – and they also bring in material fibres and loose hair,” noting that if left untreated these tourist byproducts would form an actual crust on the frescoes.

Since then, Paolucci’s been calling for better climate control systems. In this week’s column, he noted that for the past two years, the museum has been studying ways to ventilate and control humidity. For the time being, climate control, rather than visitor limits, is seen as the best offset. — Barbara Benham