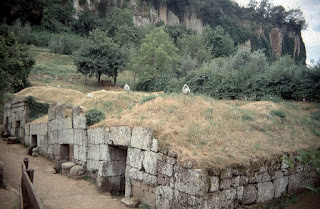 Little is known about the Estruscans, the people who dominated a large swath of Italy for centuries before eventually being absorbed by the Roman Empire. They left no written works that might have chronicled their culture and their doings, and, until recently at least, scant artifactual evidence surface. Earlier this month, a group of U.S. and Italian archeologists announced that they’d found the first documented instance of Etruscan pyramids in a wine cellar in Orvieto, Umbria, a major center of Etruscan civilization, dubbed “Etruscan central” by some.

In addition to the pyramids, the dig has yielded other Etruscan artifacts, including Attic red figure pottery from the middle of the 5th Century B.C. and 6th and 5th century B.C. Etruscan pottery, according to an article on the pyramids in Discover Magazine.
The two pyramids found at the house, about ten feet below the surface, are linked together by a tunnel. There are thought to be three other underground Etruscan pyramids in Orvieto. Archeologists are not clear whether they were used for religious purposes are as tombs. Despite little documentary history, the Estruscans left a long shadow on Italian culture. They are credited by historians with teaching the Romans how to build roads.
It’s too early to know whether the house will be eventually open to visitors. Whatever the decision there, visitors to Orvieto can find Etruscan artifacts at the Museo Claudio Faina e Museo Civico (The website is in Italian, you can easily translate it in English with Google Translator.) There are many other Etruscan sites in and around Orvieto.
For a slide show of the Etruscan house, click here. — Barbara Benham
Photo by isawnyu, flickr