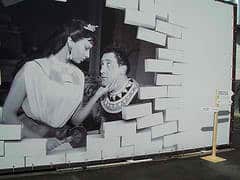 The Occupy Wall Street movement may have fizzled around the world, but that hasn’t stopped workers at Italy’s famed Cinecitta movie studios from staging a protest of their own, complete with round-the-clock camping at the production company’s main entrance, for the past two months. At issue: the fate of their jobs, should Cinecitta restructure. With the unemployment rate in Italy at 10.7%, this is no small concern. At greatest risk, according to press reports, are set designers and lighting engineers.

Founded by Mussolini in the 1930s as a propaganda studio, Cinecitta went on to be the production site of many great movies, including Ben-Hur and Cleopatra, Fellini’s La Dolce Vita and Satyricon and, more recent, Martin Scorsese’s Gangs of New York. In the 1980s, the Italian government privatized Cinecitta, to stave off bankruptcy.

While Cinecitta — 5.5 miles from the center of Rome — remains Europe’s largest production studio, with 22 stages and 300-plus dressing rooms, Cinecitta management is looking at breaking up the concern and possibly adding a movie studio theme park and a hotel. A hotel? That caught our attention as a possibly intriguing concept, but as this BBC report explains, the hotel would be for people working on location at Cinecitta.

Work at Cinecitta continues apace, as does the studio’s popular exhibit, “Cinecitta Shows Off.”  — Barbara Benham