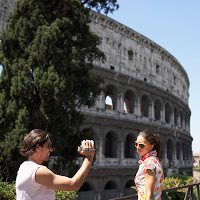 Someone neglected to tell Rome’s Colosseum that there’s a tower in Pisa that has cornered the market the whole “leaning” thing. Italian officials announced Tuesday that the south side of the Colosseum may now be 15 inches lower than the north side of the 2,000-year old monument.

“The concrete foundation on which the Colosseum is built is an oval-shaped ‘doughnut’ which is 13 metres [42 feet] thick,” Professor Giorgio Monti of Rome’s Sapienza University told The Telegraph (U.K.). “There could be a stress fracture inside it.”

Engineers note that the vibrations from a nearby subway line and Rome’s heavy car traffic may have contributed to the Colosseum’s problems. Chunks of stone have been falling from the structure over the past few years.

Might now be the time to visit the Colosseum if the repairs on Pisa’s Leaning Tower are any indication? The tower was closed for a decade as engineers sured it up. Could the Colosseum face a similar long-term closure?

No, according to Italian cultural officials. The Colosseum repairs will begin in December and are expected to take 2.5 years, during which time the iconic monument will remain open. The restoration will also help make more areas of the Colosseum open to the public starting in 2015.

Given the financial crisis in Italy who is going to fund such repairs? In an effort to find creative ways to finance the preservation of ailing landmarks, Italian officials are reaching out to corporate sponsors. Luxury leather company Tod’s will foot the $30 million bill to fix the Colosseum.

“Companies have a social responsibility that should be supported and carried out,” Tod’s founder Diego Della Valle told a news conference. “It is also a signal for investors that it is right to invest in this country.”