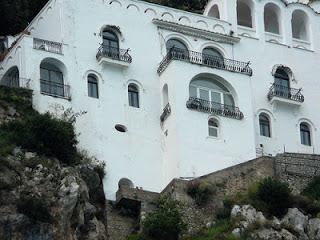 The American author Gore Vidal has died at the age of 86. The iconic Vidal will be remembered for many things including his 25 novels and political activism. Vidal will also be noted for his enduring love for Italy. He lived in Ravello on Italy’s Amalfi Coast for more than three decades. Vidal was known to locals as “Il Maestro.”

Gore Vidal owned one of the most stunning villas in all of Italy; the cliffside La Rondinaia (The Swallow’s Nest). He sold it for a reported $17 million in 2006. Vidal’s villa, purchased by an Amalfi Coast hotelier, was slated to become a luxury hotel but appears to have remained a private rental. View this video interview with Gore Vidal inside La Rondinaia.

In a 2004, The New York Times wrote about Vidal and his relationship with the villa, “La Rondinaia already had a pedigree when Vidal bought it in 1972. It was built in the late 19th century by a daughter of Lord Grimthorpe, a lawyer and architect who owned the massive Villa Cimbrone just up the slope. But it took Vidal to make the pedigreed house legendary. Like his friend Greta Garbo, Vidal wanted to be alone, but with select company. In their reclusive paradise, he and his longtime companion, Howard Austen, who died last year (2003), entertained Rudolf Nureyev, Mick and Bianca Jagger, Lauren Bacall, Paul Newman, Tennessee Williams and Princess Margaret, among many others.”

La Rondinaia had 20 levels as it was built into the cliffs and it could only be reached on foot. At the time, Vidal said he selling because he could no longer walk into Ravello’s piazza from his home.
Photo by Courtney Bolton, flickr.com