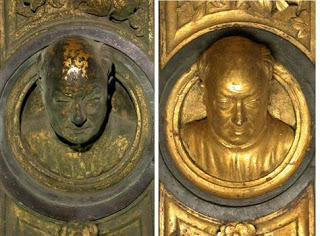 If you’re visiting Florence in September or during the fall of 2012, you will have the chance to be among the first in three decades to lay eyes on the original 15th-century gilded bronze door by Lorenzo Ghiberti which Michelangelo called “The Door of Paradise.”

This medieval masterpiece weighs eight tons and had been part of the baptistery of Florence’s Duomo for more than 500 years until it was removed for restoration. The door took Ghiberti 21 years to complete. It consists of 10 panels, most of which depict the life of Christ from the Old Testament. At the intersection of the panels are gilded prophets and sibyls, or women who were regarded as prophets by the ancient Greeks and Romans. The panels themselves are surrounded by a framework of foliage.

To spare the door from damage during World War II, it was removed from the baptistery. Shortly after, it was caught in the flood of the Arno River in 1966 which devastated the city of Florence. Only four of the ten panels had remained after the flood and, 26 years later, a copy was put in its place as the original was taken for restoration.

The “Door of Paradise” will not be returning to the Duomo following the extensive work, but from September 8, it will go on display in a case at a the nearby Museo dell’Opera di Santa Maria del Fiore (Piazza del Duomo, 9), to preserve it from renewed damage. Tickets are 6€ and the museum is open Monday through Saturday, 9 a.m. to 7:30 p.m. and Sunday, 9 a.m. to 1:45 p.m.