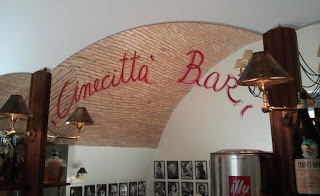 Even if you can’t afford a night at Italian-American film director Francis Ford Coppola’s new hotel Palazzo Margherita in the southern Italian region of Basilicata, a visit to his ancestral hometown of Bernalda is will worth a visit. Bernalda is like a town out of the 1950s and there is plenty to see in this area of Basilicata.

Plus, nearly anyone can afford a drink or a meal at Cinecittà Bar, another Coppola production, just next to the palazzo on Bernalda’s main and open daily to the public for lunch and dinner.  Cinecittà is, of course, the famous film studio in Rome that is considered the Hollywood of Italy.

As I mentioned in my detailed review of Palazzo Margherita, Coppola and famed French interior designer Jacques Granges didn’t miss a detail in restoring the palazzo and they didn’t at the bar either. My favorite touch: “Cinecittà Bar” written out in faux lipstick on the bar mirror. (The antique bar itself came from Paris.) 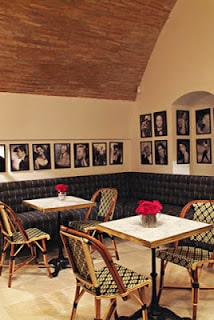 Another beautiful design detail in the bar are the black and white photos of Italian film stars and directors of the 1950s and 60s – the golden age of Italian cinema.

Plus, the chefs behind the fabulous food at the hotel, including Chef Filomena, also make the dishes for the bar, so you’re in for a treat no matter what you order.