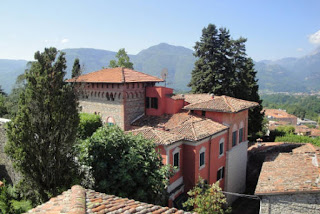 Are you in the market to buy a villa in Tuscany? Granted this is still in the “dream” category for most of us, but an intriguing auction taking place later this month just might help one lucky bidder snag an elegant villa in Tuscany for a steal of a price.

Villa Sognare, a 26-room villa in the walled town of Barga, will be sold at auction on June 20th. The fascinating thing about this auction is that it is being held with NO RESERVE. That means there is no set opening bed and no minimum price the villa must sell for, it will simply go to the highest bidder. That doesn’t mean just anyone can bid however, bidders must  make a pre-bid deposit of 100,000 euros by June 19th. They need not be present in Tuscany, as bidding will be held online via auctionnetwork.com

The villa, currently operated as a bed & breakfast, has been owned by an American couple for the past 10 years.  They worked to meticulously restore the property. The nine bedrooms are currently advertised for rates of 50 to 125 euros per night. Villa Sognare seems like a natural choice for those who dream of living in Italy and potentially running a business there as the villa could continue as a B+B or offered as a villa rental.

Barga, located about 20 miles north of Lucca, has been honored by the Italian Touring Club as one of the 50 most beautiful villages in Italy. The 10,000 inhabitants enjoy mountainous views, historic buildings and plenty of culture. Barga is host to Opera Barga, a festival held every July, and Bargajazz, an annual celebration in August. A number of artists call the area home.

You can take a virtual tour of Villa Sognare here and if you’re one of the lucky ones who could even think about bidding on such a gem, here are all of the details.