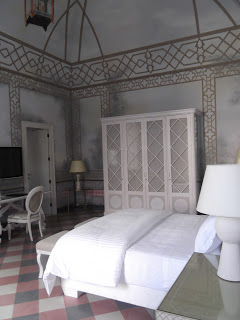 The final destination on my recent trip to Italy was the most moving. I drove to the small town of Bernalda (in the in-step of the Italian boot in the region of Basilicata) to stay at the new 9-suite hotel film director Francis Ford Coppola opened in his ancestral hometown.

Even if you can’t afford a night at Palazzo Margherita (few can), consider Basilicata as part of your next trip. These three Basilicata towns make for great day trips no matter where you stay. This region is part of the real Italy. (In fact, this 4-minute video about Basilicata narrated by Coppola is worth a view.)

It took me four pages in the May issue of Dream of Italy to recount my experience at Coppola’s hotel, from the cooking lesson to private film screening. This production was 50 years in the making as Coppola first visted here in 1962 (his grandfather left in 1904) and is truly the director’s love letter to Italy.

Here is an excerpt about the palazzo’s suites:
“Running a hotel is like making a movie; it’s all about putting on a show,” Coppola recently told Vogue. “You start with an idea, a theme-a leisure palazzo, for example-and then you pay attention to a million details. And whether you’re staying in a hotel or watching a film, it’s those details that provide the experience.”

Each of the nine guest suites is completely unique with its own storyline of sorts. One of the most impressive suites is #4, where Sofia Coppola (the daughter of Francis and an Academy Award-winning director herself) stays. She and French interior designer Jacques Grange created the magical gold trompe l’oeil lining the walls and ceiling. It gives the sense of stepping into a light and airy Belle Epoque garden.

As we look around the room, the managing director points out the influence of the Coppolas. “Francis likes to read in bed,” he says as he points next to the bed, “so he chose these specific reading lights which are in each room.” He later points out the hearts in the tiles lining Sofia’s bathroom and thinks she influenced Grange in adding them to the design.

Suite #9, where Coppola and his wife stay, is a departure from the other rooms (it was originally an open terrace that has been closed in) in its Arab motif. Coppola designed the colorful, airy room it as an homage to his Tunisian grandmother. One wall is filled with French doors leading out to a huge terrace above the garden – truly the best view in the palazzo.

I will spend the night in suite #8, named for Coppola’s granddaughter Gia. Its light pink walls, floral couch and an original ceiling fresco depicting lovers Amore and Psyche combine to make it the most romantic suite in the palazzo. The Juliette balcony overlooking Corso Umberto practically begs for a local Romeo to come calling.

Lined up against the bathroom mirror, between the claw foot tub and shower, there is a selection of full-size bath products and a candle from Florence’s famous Officina Santa Maria Novella. Sitting atop of the candle is a matchbook from Sofia’s wedding, another touch that makes me feel like a guest in a home rather than a hotel.

Read the rest of the article about the palazzo’s deep links to Coppola’s ancestors, the cooking lessons included in each stay, the private screening room and more when you subscribe today for immediate access to the entire article, the May issue and 93 back issues PLUS you will receive 3 FREE issues of Italia! magazine ($32 value) mailed to your home as a subscription bonus.