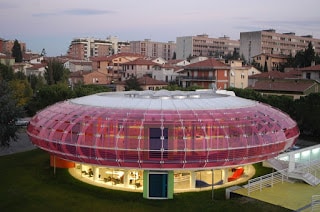 In the February 2012 issue of Dream of Italy, Irene Levine visits the oldest public library in Europe in the town of Cesena. In this excerpt from the current issue, Elaine Murphy looks at another of Italy’s libraries that warrants a visit:

This public library, located in the San Sisto district of Perugia (Umbria), was named for 20th-century Perugia-born poet Sandro Penna. Its modern design and open floor plan make it an anomaly among Italy’s traditional and historic buildings – it was built in 2004 and designed to look like a flying saucer. The library’s transparent magenta walls and disc shape allow plenty of light to flow in, creating a homey and relaxing feel. The airy, informal space is equipped with multimedia stations on all three floors, as well as a colorful area catering to children. At night, the illuminated building casts an ethereal glow. Call (39) 075 5772500 or visit http://www.commune.perugia.it/