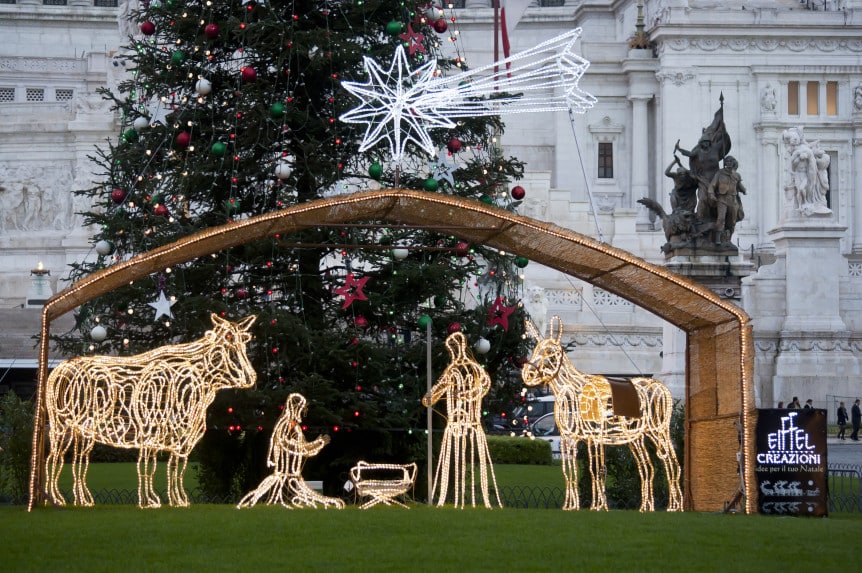 You can find bigger Christmas trees (alberi di Natale) and more extravagant decorations (decorazioni) in the United States, but nothing looks, tastes, feels or sounds like la stagione natalizia (Christmas season) in Italy. With roots in the “Saturnalia,” the winter solstice rites of ancient Rome, and Christian commemorations of the birth of Gesù Bambino (Baby Jesus), the Italian holidays blend religious and pagan festivities that light up the darkest of nights.

In Rome and southern Italy, the traditional sound of Christmas is the music of bagpipes and flutes played by shepherds from the region of Abruzzo. According to legend, shepherds entertained the Virgin Mary in Bethlehem with their simple instruments. Zampognari (bagpipe players), wearing shaggy sheepskin vests, felt hats and crisscrossed leather leggings, used to come to Rome weeks before Christmas to play in churches. These days the shepherds arrive later and play their ancient instruments in front of elegant stores along the Via Condotti and other
shopping streets near the Spanish Steps.

Festivities such as fairs and torchlight processions begin weeks before and continue weeks after December 25. Here are the key dates to keep in mind if you are planning a trip to Italy:

December 6: La festa di San Nicola, the feast of St. Nicholas, the patron saint of shepherds
December 8: La festa dell’Immacolata, the feast of the Immaculate Conception, a Catholic holy day honoring Mary, the virgin mother of Jesus. In Rome, the Pope comes to the Piazza di Spagna to drop a garland of flowers around the statue of the Madonna (Since she tops a high column, firemen on ladders do the actual placement.)
December 12: La festa di Santa Lucia, the festival of lights encircled by oranges, lemons, polished apples, pears, chestnuts, figs and colored eggs. Another tradition dates back to pagan rituals that attempted to bring back the heat and light of the sun: the Yule log, which burns during the last twelve nights of the year. It always remains lit when the family goes to Midnight Mass on Christmas Eve because of the legend that Mary stops by to warm her newborn child before the blazing fire.
December 24: La vigilia di Natale (the vigil, or eve)
December 25: Natale, which literally translates as “birthday”
December 26: La festa di Santo Stefano, Saint Stephen’s day
December 31: La festa di San Silvestro, Saint Sylvester’s day, or New Year’s Eve (la vigilia di Capodanno)
January 1: Il Capodanno, literally the top of the year
January 6: L’Epifania, Epiphany, which marks the arrival of the Magi, the three wise men, who brought gifts to the infant Jesus from afar.

The Tastes of Christmas

When I ask Italians what they do most during the Christmas holidays, they say, “Mangiamo” (we eat) — very often and very well, with a huge feast on Christmas Eve, il pranzo di Natale at mid-day on Christmas, and il cenone di capod’anno, another elaborate dinner on New Year’s Eve. In some regions the Christmas feasts must have seven courses (for the seven sacraments); others serve nine (the trinity times three) or 13 (for Jesus and his 12 disciples).

The centerpiece of the Christmas Eve dinner is fish, particularly eel, a favorite of the ancient Romans that appears in the earliest known cookbook, written by a gourmand known as Apicius. This symbol of life and immortality was traditionally sold alive and wiggling, then beheaded, chopped and dropped into boiling water, spit-roasted, grilled, stewed with white wine and peas, or pickled in vinegar, oil, bay leaves, rosemary and cloves.

The Christmas day feast usually starts with a rich pasta, such as cappelletti in brodo, little hats stuffed with chopped meats, cheese, eggs or pumpkin. By tradition everyone is supposed to eat at least a dozen. Depending on the region of Italy, the main course may be capon, pork or turkey. However, everyone saves room for the special dolci (sweets) and breads of Christmas.

The presepio (Christmas crèche) dates back to 1223. Saint Francis, the charismatic friar of Umbria, wanted to bring to life the story of Jesus’s birth. In the little town of Greccio, he placed a manger in some straw and added a living Mary, Joseph, Jesus, shepherds — and actual cattle, sheep and donkeys (who, the story goes, once warmed the infant with their breath).

You can find presepi, including presepi viventi (living crèches) ranging from simple to stunning, in churches throughout Italy. Some scenes include grottoes, trees, lakes, rivers, angels suspended by wires and reproductions of an entire village or part of a town.

Naples is most famous for its presepi, with hundreds of nativity scenes, including many with handmade or antique figures, set up throughout the city. Throughout the year artisans in central Naples create clay figures that are shipped all over the world for Christmas crèches.

In some parts of Italy, families construct a tree of light, a pyramid-shaped wooden frame several feet high with tiers of shelves decorated with colored banners and gilt pinecones. Often a manger scene occupies the bottom shelf, with gifts of fruit, candy, and presents above, small candles fastened to the slanted sides, and a star or small doll hung at the top.

In Sicily, families make beautiful little altars, hung with green leaves and encircled by oranges, lemons, polished apples, pears, chestnuts, figs and colored eggs. Another tradition dates back to pagan rituals that attempted to bring back the heat and light of the sun: the Yule log, which burns during the last 12 nights of the year. It always remains lit when the family goes to Midnight Mass on Christmas Eve because of the legend that Mary stops by to warm her newborn child before the blazing fire.

If you want to wish your Italian friends happy holidays, here are some greetings:

Dianne Hales’ article Secrets of the Italian Language appeared in the May 2009 issue of Dream of Italy. She is the author of the book La Bella Lingua: My Love Affair with Italian, The World’s Most Enchanting Language.