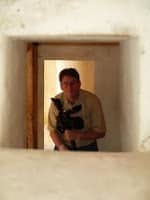 Our friend film director Steven McCurdy, producer of Postcards from Italy and Bringing Home Sardinia, is offering an intensive 25-day film workshop in Italy, approximately June 20 to July 12, 2012. The hands-on cultural documentary program is entitled “Conversations of Italy” and McCurdy is accepting four applicants to join him. This is the third film workshop program McCurdy has conducted in Italy (see this video and this video from the 2010 workshop) but the first allowing the participants to work collaboratively on short films directed, edited and produced by McCurdy.

The program will begin on the island of Sicily, where during the first few days participants will familiarize themselves with the film production equipment and the working methods used by Mr. McCurdy. During the next four weeks, in McCurdy’s unique “follow his heart,” synchronistic style you and he will follow the “travel and documentary muses” where they lead. There is no set itinerary. From the island of Sicily to Naples, Rome or a dozen other places, ending in Venice, the group will criss-cross the country in search of the heart and soul of Italy.

Participants will discover those one-of-a-kind experiences that make up Steve’s other Italian films. This is a chance of lifetime to experience the real Italy, the Italy rarely seen by tourists and the Italy that so romantically and magically presents itself whenever Steven brings out his camera. The cost is $3,500, plus airfare. Those interested in applying should contact McCurdy through his website. All applicants must complete an application and a letter of interest including a creative statement on why you want to participate, what you hope to accomplish from the experience, and what talents and work experience you believe can contribute to this creative experience

McCurdy (this is one lucky guy to be spending so much time in Italy!) is also co-hosting a retreat in Umbria this June. The HeartLife Retreat To Spoleto, Italy & Beyond features yoga, meditation, healthy eating and daily excursions throughout the Umbria countryside.