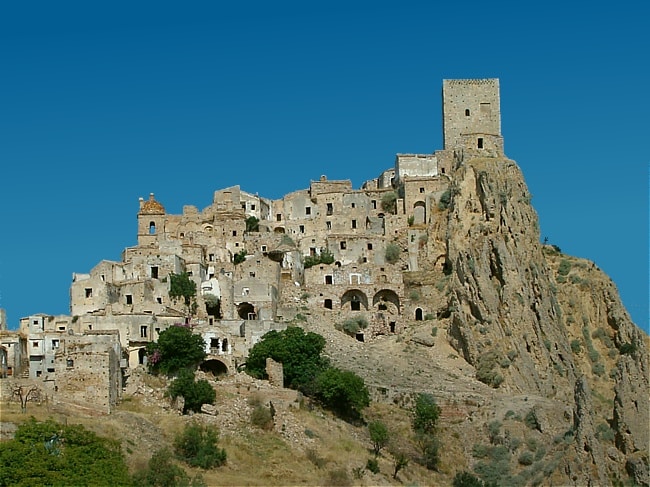 Editor’s Note — I recently returned from a quick visit the southern Italian region of Basilicata. My purpose was to stay at Francis Ford Coppola’s new hotel Palazzo Margherita in his ancestral hometown of Bernalda. I was blown away by the experience and it re-ignited my fascination longtime with the area. Whether or not you’re going to stay in Coppola’s palazzo, here are some of the must-see sites (besides spending some time at one of the stunning beaches on the Ionian Sea) in this corner of Basilicata:

Matera — Matera’s sassi, cave shelters carved out of white-washed tufa rock, have been designated a World Heritage Site by the United Nations. Stacked on top of each other, they almost look like a giant honeycomb from a distance. Peasants and their animals lived together in the squalor of these makeshift homes for centuries until the 1960s. Some have now been turned into hotels and restaurants. Mel Gibson filmed The Passion of the Christ here given Matera’s incredible resemblance to ancient Jerusalem. Matera is a must-visit for any trip to Basilicata.

Aliano — In the mid-1930s, doctor and activist Carlo Levi was forced by Mussolini to live in internal political exile in the town of Aliano. Levi recounts his observations of the poverty and mysticism of southern Italy in his 1945 book Christ Stopped in Eboli In the book, Levi gives Aliano the fictional name Gagliano. Today, you can see the house where Levi lived in exile as well as a museum displaying his original manuscript, drawings and other artifacts from his time in Aliano, where he requested to be buried upon his death in 1975. Call ahead (39-0835-568315) to make sure it is open. (Inspired by Levi, writer David Yeadon spent a year living in Aliano and wrote a book about it.)

Craco — Landslides in the 1950s, 60s and 70s forced the town of Craco, about 40 minutes from Bernalda, to be abandoned. What remains is a haunting and some feel stunning ghost town. Christ Stopped at Eboli, as well as several other movies, was filmed here. See the free 68-page travel guide produced by the Craco Society.