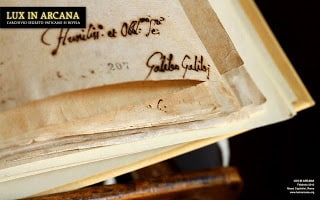 If you’re visiting Rome between March and September 2012, plan to visit the Capitoline Museums for the once-in-a-lifetime exhibition Lux in Arcana: The Vatican Secret Archives Revealed. One hundred original documents — spanning 400 years of Papal history — will leave the confines of Vatican City for the first time. The records are usually kept in Vatican Secret Archives, a highly secure building behind St. Peter’s Basilica.

Some of those documents on display will include:

The exhibition opens March 1st. You can purchase a combined exhibition/museum entrance ticket for the Capitoline Museums for 12 euros and visit Tuesday through Sunday, 9 a.m through 8 p.m.