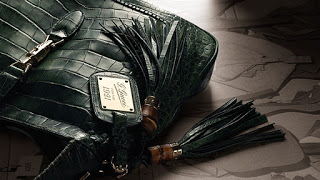 In the nine decades since Guccio Gucci opened a small leather shop in Florence in 1921, his name and products have become fashion icons across the world, and can now be viewed at the new Gucci Museum in Florence. The museum opened on September 28th, as part of this year’s 90th anniversary celebration of the iconic Florentine designer. The museum’s three stories display a variety of items bearing the Gucci brand, including designer clothing, glamorous evening gowns and black and white photographs of stars wearing Gucci garments. A travel-themed room displays luggage and accessories pays tribute to Gucci’s job as a porter at London’s Savoy Hotel in the late 19th century, while another room showcases items with a floral motif created for Grace Kelly in 1966. Visitors can view a history of Gucci logos, a 1970s Gucci-upholstered Cadillac Seville, handbags, and other rare home and lifestyle items, many of which are on display for the first time. The museum also contains an art exhibit with works from contemporary artists, established by the Francois Pinault Foundation. All items were pulled from the museum’s basement archives, containing thousands of Gucci pieces, and the museum plans to rotate its exhibits to display more of its archived collection. Half of the museum’s admission price of 6 euros per person will be donated to help preserve historical artifacts in Florence. Gucci creative director Frida Giannini first created the concept for a museum dedicated to the luxury fashion brand. The museum is located in Piazza Signoria in the 14th-century Palazzo della Mercanzia, which was once the home and working space of the Medici family. Piazza Signoria, in front of the Palazzo Vecchio, is a key part of the history of the Florentine Republic. The museum is open daily from 10 a.m. to 8 p.m. — Elaine Murphy