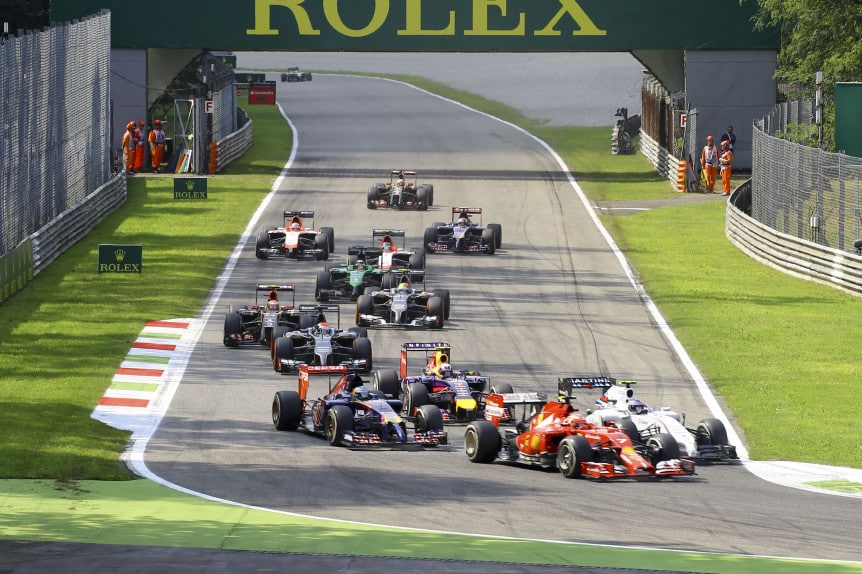 This article originally appeared in the July/August 2011 issue of Dream of Italy. Updated 2018.

I was smitten instantly with the sleek lines and nonchalant sophistication of the gray 1953 Lancia Aurelia. Ah, I thought, “This will be la mia macchina (my car).”

I was milling about with members of my group trackside at Autodromo Nazionale Monza waiting to be driven around the track in vintage cars. Faster than I could say Juan Pablo Montoya (he holds the track speed record of 200 miles per hour), Sami Azer jumped into my Lancia and the driver took off.

I stubbornly resisted getting into the Ferrari, the BMW, or any of the other antique autos that queued up. I was holding out hope that my Lancia would return for me. As our allotted time dwindled, it became clear that my options were either a newer model Renault subcompact or the highway.

As Monza communications official Roberto Arlati maneuvered the Renault at okay-by-me speeds of up to 50 miles per hour, I shelved my Lancia lust and savored the thrill of traversing this storied track. No hard feelings, Sami Azer. Not only are you a nice guy who had no clue I wanted the Lancia, you’re co-escorting this fabulous familiarization trip, sponsored by New Jersey-based travel company Central Holidays. Can’t stay mad at you.

Racing and So Much More

While it’s the Autodromo and the Formula 1 Italian Grand Prix that have brought Monza international fame, the city boasts a rich history and splendid attractions beyond the race track. My group arrived in Monza after several days touring the idyllic Lake Como area and the towns of Como and Lecco that anchor the west and east legs of the lake. Monza is the main city of the small province of Monza-Brianza, long considered the serene country garden north of Milan.

Guidarte guide and trained architect Laura Radaelli welcomed us warmly for what would be, fittingly, a whirlwind day. Perhaps Laura’s mobile phone ringtone — the howl of Formula 1 cars at full throttle — should have been a clue.

The historical and religious foundation of the city is the bull’s eye of the charming walled medieval center: The Duomo of Saint John the Baptist. The current Gothic structure was begun in 1300 on the remains of the original Duomo commissioned by Queen Teodolinda to celebrate her dynasty and the conversion of the Kingdom of Italy to Catholicism. Teodolinda is revered in Monza.

The Longobards (or Lombards) were an East Germanic pagan tribe that likely migrated south from Scandinavia during the early Middle Ages. From their invasion of the area that is now northern Italy in 568, they went on to rule much of the peninsula then known as The Kingdom of Italy. Their legacy prevails today in the name of the region Lombardy.

Longobard King Autari married Teodolinda, the Catholic daughter of a Bavarian Duke, in 589 and so she moved to Monza. A year later, she was widowed.  She soon married again to Agilulfo, the Duke of Turin. After his death in 616, she ruled as regent for her young son Adaloalfo.

Inside the Duomo to the left of the main altar, we stepped up into the Teodolinda Chapel that houses the Queen’s remains. We could glimpse only sections of the floor to ceiling frescoes depicting events of the Queen’s life. Painted by brothers Ambrogio and Gregorio Zavattari in the mid 1400s, the work is currently under restoration.

Fortunately, one priceless artifact was still visible. The young woman who had unlocked the chapel stepped up to the altar and reached into the tabernacle to lift out a pillow holding the Corona Ferrea (Iron Crown). The circle of six wide gold sections is adorned with decorative enamel and precious stones.

Inside the crown is a metal band that is said to be one of the iron nails used in the Crucifixion of Christ. Used for many Longobard coronations including Charlemagne and Frederick I Barbarossa, the crown was donated to the Duomo di Monza in the 11th Century.

We descended to the Museo e Tesoro del Duomo di Monza (the Museum and Treasury of the Duomo). Recently modernized, this sleek space houses a collection of fine, distinctive objects. One of the most striking is the gilt-silver “Hen and Chicks” from Teodolinda’s tomb. Fashioned by Milanese goldsmiths, the naturalistic hen with ruby eyes may date from the 4th century while the seven early 7th-century chicks, with sapphire eyes, are more stylised. Laura explained that the exact meaning of the group is uncertain. It may symbolise the Church protecting the faithful or Queen Teodolinda surrounded by Longobard dukes.

Just minutes from the medieval centro stands the magnificent Villa Reale (Royal Villa) which a different noble family, also Northerners, created more than a thousand years after Teodolinda’s reign. Queen Maria Teresa of Austria commissioned the Neoclassical structure as a warm-weather estate for her son the Archduke Ferdinand in 1777. Calling this grandiosity a summer house is like referring to St. Peter’s as a parish church.

Designed by La Scala architect Giuseppe Piermarini and completed in 1780, the villa features a horseshoe layout fronted by a formal courtyard and rose gardens. The rear of the villa gives unto lovely English gardens that are but a small portion of the sprawling Parco di Monza (more on that later.)

The central living quarters are flanked by the connected chapel, greenhouses, and stables with unified facades. Standing on Viale Brianza facing the Villa, it’s impossible for the eye to take in the structure in its wide-angled entirety.

Laura explained that we would be touring some sections of the Villa recently restored by the Consorzio Villa Reale e Parco di Monza. Comprised of representatives from the Ministry for Cultural Heritage and Activities, the region of Lombardy, Milan City Council and city of Monza, the Consorzio is dedicated to restoring the property and revitalizing it as a museum and civic space. One pending goal is to ready the site for international visitors who’ll be coming from the World Expo Milano 2015. A daunting project, to be sure, considering  the number of political entities involved.

After the Austrians, the villa experienced trauma, renovation and then neglect. In the late 18th Century, Napolean Bonaparte barracked his troops at Villa Reale. Definitely not good for the interior. The Austrians returned for a bit but after the unification of Italy in 1861, King Umberto I and Queen Margherita (now recognized by her namesake pizza) of the House of Savoy took over the property as a year-round residence. In the mid 1880s, Umberto refurbished it in contemporary décor and even wired the place making it probably the first palace in the world with electricity.

Umberto and Margherita were distant cousins fated to an unhappy union in an arranged alliance. Umberto kept a mistress ensconced nearby and employed secret passageways in and out of the villa to visit her discreetly. Passing through the silk-walled separate bedrooms, dressing rooms, and bathrooms of Umberto and Margherita, I could almost feel the sadness of their parallel lives. Ironically, private weddings take place these days in the grand ballroom.

Margherita took pleasure in literature. On Sundays, she hosted literary salons, favoring poets particularly. Giosuè Carducci, a Nobel-prize winning poet was said to adore her. His cohorts mocked his devotion saying he had turned from “a Republican Lion into a Royal Dog.”

Part of the consorzio’s architectural teams’ ongoing work is playing detective to retrieve original furniture and fixtures. Pieces have been found as far away as Buenos Aires and as close as the back garden. Of particular note are the furniture and wood work of Giuseppe Maggiolini dating from the late 1700s. Working with dozens of different woods, soaking them first in cold water and then plunging them into hot sand, he achieved shadings as subtle as a master painter. The parquet and floor-to-ceiling cabinetry in Umberto’s library is stunning.

The Savoys’ residence at the villa came to an abrupt climax in the first year of the new century. Umberto was assassinated on July 29, 1900, during a gymnastics competition in the park. It was a sweltering night and the King decided not to wear his metal jacket even though there had been a previous attempt on his life.

Waiting in the park was Gaetano Bresci, a Tuscan weaver living and working in Paterson, N.J., who shot the king four times. Bresci was avenging the death of his sister, who was one of 90 unarmed civilians shot by Italian military police during a protest in Milan over high bread prices.

After Umberto’s burial in the Pantheon in Rome, the Savoys dispersed the villa’s furnishings and departed, never to return.

Backing up to the Villa Reale are more than 1,700 acres of Parco di Monza, the fourth largest walled park in Europe. This verdant space of meadows and woods is twice the size of New York’s Central Park. Designed by Luigi Canonica for Napolean Bonaparte and his stepson Eugène de Beauharnais, Viceroy of Italy, it encompasses verdant woods, meadows, stately villas, farm buildings and mills.

The Lambro River skirts the southern end of the park. Several bridges span it but the oldest is 15th-century Ponte delle Grazie Vecchie that crosses from the park into the city.

The parco draws visitors from Milan and other towns in the region for its natural and recreational attractions such as the large campground. The Autodromo Nazionale Monza race track is located right inside the park. The Autodromo was built in a mere 110 days in 1922 commissioned by the Automobile Club of Milan. Extensively modernized since WW II, it is now owned by the cities of Monza and Milan and managed by the Automobile Club of Italy. Several civilian driver training schools operate at the track.

On days with no scheduled events, the public is welcomed to visit the paddock, shopping area, the pit building, gift and book shops, bars and a self-service restaurant, and to traverse the track in cars, motorcycles, bicycles, rollerblades, or on foot. My group was treated to a special behind-the-scenes visit to the control room, penalty room and the press room which has space for 600 journalists.

For an outsider, it may seem jarring to find one of the fastest car racing courses on earth plunked in a vast serene park but it’s a surprisingly harmonic convergence of technology and nature. Even in my brief visit, I sensed that the city and its region of Lombardy, consider innovation and culture equals.

From a medieval queen to racing royalty, Monza has long been up to speed.