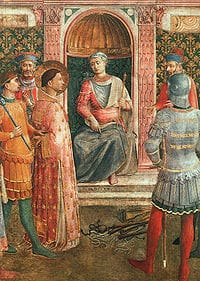 This is an excerpt from Dream of Italy’s NEW Rome travel app for iPhone and iPad:

On August 10th, the martyrdom of San Lorenzo is celebrated with fireworks and celebrations throughout the area around his crypt on the Via Tiburtina in Rome, where the saint was killed in 258 AD. The patron saint of librarians, firemen, bakers, and other professions whose jobs involve fire and roasting, San Lorenzo’s association with such incendiary professions is certainly a disturbing one.

His martyrdom is said to have occurred by slowly being roasted on a gridiron by the troops of the Emperor, and, as he died, is believed to have said in Latin, “Ecce, miser, assasti tibi partem unam, regire aliam et manduca” (Here, you miserable person: you have roasted one side for yourself, now turn me over and eat.)

The Feast of San Lorenzo is an event celebrated throughout Italy on August 10, in honor of the saint. The focal point of the celebrations in Rome is the fireworks and food at the Basilica of San Lorenzo Fuori Le Mura, which was built above the saint’s tomb. Other celebrations are spread out around Rome’s piazzas. The Feast of San Lorenzo is also known as “The Night of Shooting Stars” because there is a meteor shower that annually falls on or around August 10. This meteor shower follows the Swift-Tuttle comet, and is interpreted as the tears of Saint Lorenzo. — Elaine Murphy