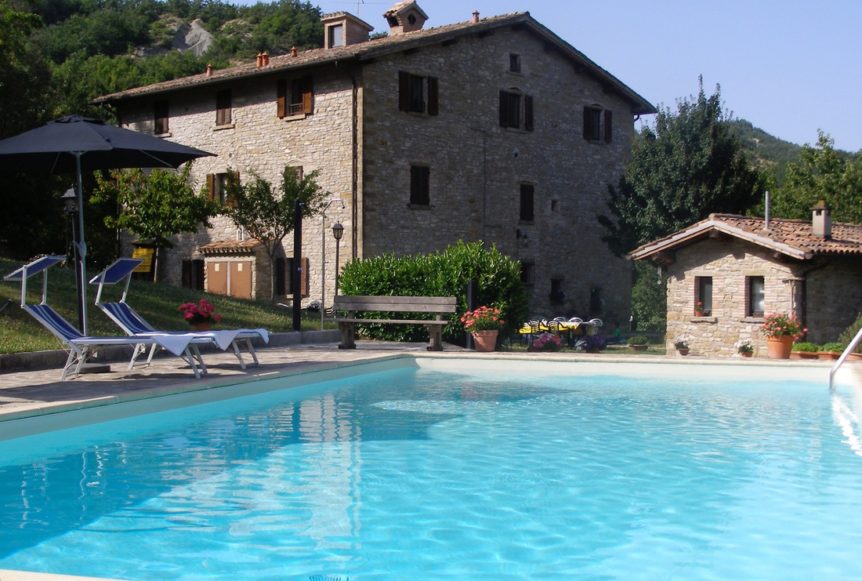 This article originally appeared in the June 2011 issue of Dream of Italy. Updated 2018.

[Also read: So You Want to Own and Run a Bed & Breakfast in Italy?]

When we arrived at Agriturismo Ca’Camone, il dottore was helping Jason install a new fence to keep the fox away from the hen house. They had lost four chickens in the last two days in broad daylight. The fox was getting bold, and something needed to be done. Il dottore, a retired cardiologist who lives nearby, is just one of the many locals in this northernmost area of Le Marche who have adopted Ashley and Jason Bartner, a young American couple who seem to have found the secret to happiness.

The region of Le Marche in central Italy is largely unknown to American travelers. It borders the regions of Emilia-Romagna, Tuscany and Umbria, with its coast hugging the Adriatic Sea. Ashley and Jason took an extended honeymoon in 2006 and, after seeing Venice, the Amalfi Coast and the Dolomites, they drove into Perugia and, almost by accident, skirted into Le Marche.

“We thought the area was so beautiful,” says Ashley, a native of Seattle. “But we couldn’t find it in any of the guidebooks and didn’t really know where we were.”

When they got home and decided that they were going to ditch the 9 to 5 routine in New York City (Jason had been working as a corporate executive chef and Ashley was an actress and hospitality maven), they turned once again to central Italy and Le Marche.

After a hair-raising real estate experience that would have sent most people running for the hills, they asked their real estate agent — on their last day before returning to Rome — what else she had. Within the hour they were sipping Prosecco and toasting their new home. They moved in three months later, on Christmas Day 2007.

Ashley and Jason had always envisioned a combination farmhouse and cooking school, and La Tavola Marche is all that and more. It’s home. They wanted to find a place where they could live like Italians and where, for a little while, their visitors get to live like Italians, too.

“Food is the most accessible way to get to know a culture,” says Ashley. “At first, the Italians didn’t understand why people would want to come and cook on their holidays. But they come to observe Jason at his classes and are seeing the connections that food can make. It’s wonderful to watch.”

Jason, a California native, was trained at New York City’s famed French Culinary Institute. He says that while his fundamentals are French, his heart is Italian. He had a few hurdles to jump to convince his neighbors that he could cook Italian, but now they’re regulars at nightly dinners and especially at the couple’s Thursday night summer pizza parties — some of the women come up to Ashley and, with hands in prayer position, say, “Please tell us he has a little Italian blood in him. His pizzas and pastas are so good.” They’ve won everybody over with their skills and enthusiasm.

Four of us arrived in late May to take over Ciliege, one of five self-catering apartments at La Tavola Marche, for a three-night adventure which included a welcome dinner, breakfasts and a half-day cooking class. The accommodations were perfect, including a little kitchen and sitting room.

In the summer, the swimming pool is open, and I can only imagine the thrill of plunging into a cool pool amidst the mountains and greenery, with the sounds of the rooster and a cuckoo in the distance. And the therapeutic mineral water (not smelly!) found on the property is known for its many healing properties.

We were treated to a dinner that first night that was carefully prepared to suit our largely non-meat-eating tastes. Jason made a lentil salad (which we’re still talking about), sweet grilled yellow peppers and homemade salumi and local cheeses that were superb. Then he brought out a tomato, bread and basil soup called pappa al pomodoro, and a homemade porcini tagliatelle with fresh peas. It all ended with a fabulous, non-alcoholic tiramisu. The couple bottle their neighbors’ wines and the local trebbiano is very, very good. Even better are Ashley’s homemade digestives: I tried the rich walnut one (nocino) and my husband Tim had the surprisingly excellent prune one.

After a quick walk-about in nearby Urbino the following day, we toured the Palazzo Ducale and the artist Raphael’s house, and ate nothing but gelato for lunch, in anticipation of the afternoon’s cooking class.

When we arrived back at the agriturismo, Jason was ready for us. The kitchen was set up in four stations and the menu was on the chalkboard: antipasti, primo, secondo and dolce. My eyes raced to the “dolce,” and when I saw panna cotta written there, I nearly cried. My favorite Italian dessert, and I was going to get to make it myself!

Jason is an excellent and patient teacher and we not only worked hard, we learned a lot. And to sit down a few hours later, having cooked seven elements of the meal ourselves, was almost as gratifying as it was tasty. Jason has a simple philosophy about the local cucina povere: let the food speak for itself. Don’t drown it in sauce, don’t cook it to death. Let the tomato be a tomato — a little salt, pepper and olive oil, and you’re done.

Because internet access is tough up where La Tavola Marche is (more than three miles off the road), we went into the nearby town of Urbania the next day in search of the internet cafe. Jason and Ashley often use the Bluetooth connection on their cell phone, hanging it from a tree, to get better reception and that, they say, is probably the biggest drawback to being up here.

But people are finding them anyway. Ashley writes a monthly column for Italia! magazine and has just started to write for its sister publication, Taste Italia, as a way to reinforce their farm-to-table approach and showcase Jason’s recipes as well as recipes that have been generously shared by their neighbors.

One of the toughest things, according to Ashley, is how “progress” is taking the children away to the big cities. “They just don’t care that much about how to make the perfect sauce or cresce di pasqua anymore,” she says. “In many ways, the local women are sharing their family secrets with us because they have no one else to tell. And we’re so grateful.”

Le Marche is a very special region — wild, green, bountiful in so many ways. And La Tavola Marche is preserving many of its traditions while it offers travelers a magical place to unwind and learn and explore. Ashley’s favorite thing to tell guests who are venturing out for the day is, “Go get lost.” Do that. But be sure to get home in time for dinner.

Linda Dini Jenkins, who last wrote for Dream of Italy about Verona in the September 2010 issue, is the author of Up at the Villa: Travels with My Husband and blogs about travel and travel writing at www.travelthewriteway.com.

The Details
Getting There

Direct flights from the United States will get you as close as Rome (a three-hour drive) or Bologna (a 90-minute drive). To get even closer to La Tavola Marche, you can transfer to local airports such as Ancona and Rimini. Cars are essential in this part of Italy.

La Tavola Marche
Agriturismo Ca’Camone
Via Candigliano
Piobbico
(39) 331 5252753
www.latavolamarche.com
Rates: Packages start at 300 euros per person for a 3-night stay including daily breakfast, dinner with wine and a cooking class. Check the website for all rates.

The farmhouse’s five self-catering suites can hold up to 22 people. They’ve hosted weddings, family reunions, language classes and girl’s getaways and will tailor cooking school and local winery tours, truffle and mushroom hunting excursions and olive oil and other farm visits to suit your needs.