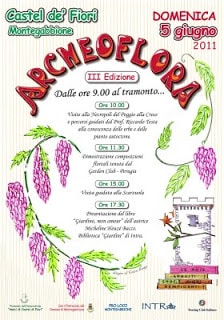 The Amici di Castel di Fiori will be holding its third edition of ARCHEOFLORA on June 5, 2011, in the historic village of Castel di Fiori near Montegabbione, in the Umbrian hills between Orvieto and Chiusi. This event is an annual gathering for lovers of nature and art and has become a major spring event in Umbria dedicated to flowers, plants and garden furnishings.

The exhibitors are distributed around the charmi

ng village. Throughout the day, from 9:00 a.m. until sunset, drinks, homemade cakes, pizza and pasta will be served as well as local wines. A variety of other activities will be offered, including a visit to the nearby 7th-century necropolis; a flower arrangement demonstration by the Perugia Garden Club; a visit to the nearby Scarzuola Convent and grounds, listed as one of Italy’s national gardens; and the presentation of a new book by a local author.

With the goal of raising money to build a community center complete with an industrial and a community hall, the Amici has produced Mozart’s Cosi Fan Tutte, Rossini’s Cenerentola and Eduardo de Filippo’s Questi Fantasmi. Record crowds from around the world have been in attendance. Given the resounding success of these and other events organized by the Amici over the years, such as numerous candlelight dinners in the square, the forthcoming ARCHEOFLORA III event is expected to live up to Castel di Fiori’s reputation as a cultural venue in Umbria. And what better way to spend a day out in a rural setting, off-the-beaten track but nonetheless fascina ting, surrounded by spring flowers?