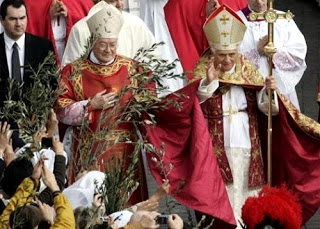 Holy Week (Settimana Santa) in anticipation of Easter (Pasqua) this Sunday is underway in Rome. It will be a rather intense week leading up to Easter and events will be filled with many tourists and devout locals. If you are not put-off by a little overcrowding, Rome will definitely be a rewarding experience.

On Holy Thursday (Giovedi Santo) the Pope will lead two masses. At the first, called the Chrism Mass held in St. Peter’s Basilica a 9:30 a.m., the traditional oils used throughout the year are blessed. The second mass, held at St. John Lateran, is later in the evening and is conducted in remembrance of the Last Supper. The Pope washes the feet of 12 of his priests to symbolize the theme of his office “not to be served, but to serve.” While all events taking place during Holy Week at the Vatican require tickets, you can enjoy the atmosphere as there will be hundreds of thousands of people from all over the world gathered in one location for one unified cause.

Holy Friday will be a sight for those who have never witnessed a Good Friday Roman-style. All statues and crosses within Roman churches are covered in purple or black cloth up through Easter Sunday. Via Crucis (the Way of the Cross) is procession led by the Pope from the Colosseum to the Palatine Hill where pilgrims carry the cross to each of 14 stations symbolizing the passion and death of Christ.

Because on Easter Sunday, many of the city’s residents and visitors will be in church, you can take advantage and explore open, public sites such as Trevi Fountain and the Spanish Steps. The Pope will be leads 10:15 a.m. mass in St. Peter’s Square. At noon, he delivers the ‘Urbi et Orbi’ message – ‘to the city and the world – from his balcony in which the Pope grants forgiveness to all Catholics. When all the blessings are dealt and the services are complete, people will be flocking to their favorite restaurants for a special feast with their families and loved ones.

The traditional Pasqua feast is the grand end to the end of Lent, including the absence of meat, and an ode to new life. The tables are decorated with fresh green flowers and ingredients. The dishes are complete with artichokes, asparagus, sun-dried tomatoes and of course a selection of stewed meats but traditionally it is lamb (most Italian dishes are traditionally based around meat so this long, meatless period is usually a struggle for them).

La Pasquetta (Little Easter) the Monday after Easter is a national holiday that is usually celebrated in the countryside or at the beach. In Siena, adults celebrate the day off of work with picnics in Piazza del Campo. In Panicale (Umbria) rolling the cheese (Ruzzolone) is an ancient tradition that is still practiced on this day. A nine-pound round of Pecorino cheese is hurled from atop one of Umbria’s steep hills. “Spotters” are stationed at different points down the path and mark where the cheese falls.

In Fontanelice (Emilia-Romagna) the Festa della Pie Fritta celebrates two of the three most popular foods of the Holy Week, bread and eggs. The piadina is light bread that usually decorates the center of the table and is eaten more as a sweet treat than a dinner accoutrement. This is the 50th year of this festival.– Kendra Howard