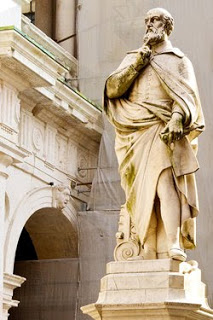 In our March 2011 issue, Julie Maris/Semel wrote about the city of Vicenza and why it is a must-visit if you are interested in architecture and the legacy of the great 16th-century architect Andrea Palladio. UNESCO has even named Palladio’s buildings in Vicenza and villas in the surrounding countryside as a World Heritage Site.

If you can’t make it to Vicenza right away, you can learn about Palladio right here at home. After all, on December 6, 2010, the Congress of the United States of America adopted a resolution – by unanimous vote ­- recognizing Andrea Palladio as the “father of American architecture.”

In New York City, the Metropolitan Museum of Art, the Public Library on Fifth Avenue, City Hall as well as United States Capitol in Washington, D.C. are studies in Palladio’s bilateral symmetry. The Rotunda at Thomas Jefferson’s University of Virginia is encircled by pairs of columns with capitals that feature the composite order of Palladio. Pattern books that American architects and builders used in the 17th and 18th centuries were highly influenced by Palladio.

The exhibition “Palladio and His Legacy: A Transatlantic Journey” organized by the Royal Institute of British Architects commemorates the 500th anniversary of Palladio’s birth and his influence from Italy to America. Already viewed in New York and Washington, D.C., the exhibition moves on to the Snite Museum at the University of Notre Dame in Indiana from June 5 to July 31, 2011 and at the Carnegie Museum of Art in Pittsburgh from September 24 to December 31, 2011.

Photo of Palladio’s statue in Vicenza by Julie Maris/Semel