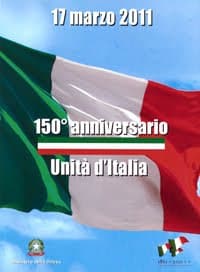 In celebration of its 150th birthday, Italy is showing its pride as the government declares March 17 a national holiday. It marks 150 years to the day since Victor Emmanuel II proclaimed the formation of the Kingdom in Italy. Turin, the unified country’s first capital, will host numerous events from March to November titled “Esperienza Italia.” Other Italian cities are also joining in on the celebration in their own way in the form of festivals, exhibitions and concerts.
For now while Italy’s official birthday has a place on the national calendar, it didn’t arrive there without some controversy and it’s not certain how long it will remain. Thursday, March 17th will bring about the closings of banks, schools, offices and most shops while some museums and galleries may remain open, but not all Italians are so excited to share in the celebration. Though this is to be a celebratory day signifying unity, some Italians are against the holiday. In times of economic hardship, some feel the day off, which will cost the country money, is unnecessary and irresponsible. Luis Durnwalder, the president of the 90% German-speaking Tirol, is voicing his opposing views claiming his region was forced into a union with Italy and therefore has no desire to participate. Others have raised the notion that the holiday is a reminder of the the economic disparity between the northern (traditionally the more prosperous) and southern (facing more struggles) halves of Italy. — Kendra Howard