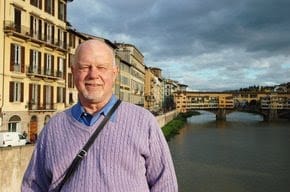 I recently did an interview with my friend travel expert Rudy Maxa. A former Washington Post investigative reporter and life-long traveler, Rudy began covering the travel industry 15 years ago for public radio’s evening business show, Marketplace where his commentaries under his moniker, The Savvy Traveler, were heard by nearly five million listeners. He now hosts a Los Angeles travel radio show and has filmed dozens of episodes for two travel series that have appeared on PBS. My favorite part of our chat was this insightful bit on what it is like to film a travel series in Italy:

Dream of Italy: We’re offering your Blu-ray/DVD set “Rudy Maxa’s Best of Europe: Italy” as a bonus to customers who spend more than $155 in our store/on subscriptions this holiday season. Tell us about the making of your series. Any funny stories from your time in Italy? What are some of your favorite scenes? How do you go about selecting what you would like to film?

Rudy Maxa: Choosing destinations is really up to me and the producers. When I started hosting the shows 11 years ago, we filmed the basics–London, Rome, Paris, and so on. But the production company who hired me–I did not yet own the shows–had worked with Rick Steves for five seasons and already knew that shows on Italy were among the most popular. So over the course of the first several seasons, we shot 11, half-hour shows in Italy.

The one hallmark about shooting in Italy is how little assistance we receive from the Italian tourism offices. Almost everywhere in the world–and I’ve shot shows from Shanghai to Uzbekistan to Delhi–tourism officials are happy to work with us helping get shoot permits, local guides or translators, hotel rooms, and so on. In Italy, bureaucrats know the country is so popular, they apparently think there’s no need to work overtime hard to help anyone publicize it.
I happen to think that’s short sighted on their part, but there you go. I recall my co-producer sending fax after fax to the tourism officials in Florence. She never got a reply. When we arrived to shoot, she visited the tourism office, and an employee there proudly gestured to a pile of her faxes to prove they’d received them.

And then there’s the matter of, um, fees. When we arrived at Pompeii to shoot, it didn’t matter that we had the necessary paperwork and an overall insurance policy that all film crews carry in case they cause any damage. The official at Pompeii informed us we’d have to pay $7,000 on the spot as “insurance” to shoot. When my producer accompanied the bureaucrat to his office to discuss this, a local guide approached and told us if we gave him $200, he’d take care of everything. And he did. He guided me and the crew around the entire complex, slipping a few bucks to gatekeepers along the way. And by the time our producer emerged to say no agreement could be reached, we’d already shot the place.

The recent, tragic collapse of a historical building there reminded me of that incident. I love Italy, but I have a hunch if we’d paid that $7,000, not much of it would have gone toward the upkeep of the historical site.

As for the making of the series, we travel lean with me (the host), the episode producer, a grip, and a shooter. Sometimes, if we have the budget, we’ll hire a dedicated sound man. We usually shoot a show in seven to eight days. We arrive with a rough script and, hopefully, all our permissions and other details in order. We don’t simply arrive and start shooting things that look interesting. We know what we want to shoot and how things fit into the theme of the show. Obviously, if something interesting happens while we’re there, we go with the flow, and often that makes it into the script that has to be re-written to the pictures upon our return to the U.S.