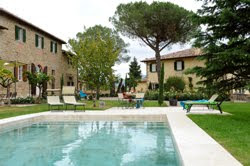 No one put Tuscany on the map quite like Frances Mayes and her book Under The Tuscan Sun. But that was before the film version of the book came out and even more people latched on to the dream of owning a villa in Tuscany OR at least staying in one for a week or two. In the film, the role of Bramasole, Mayes’ wreck-turned-dream-home was played by Villa Laura in Cortona. You didn’t think Mayes was going to let Diane Lane and crew film in her place, did you?
Villa Laura was purchased in 2006 by the owners of Cline Cellars Winery of Sonoma, California. The new owners have carefully and thoughtfully restored the property and it is now available for rent from our friends at Doorways. The villa is actually a villa plus farmhouse, sleeping a total of 18 people. The bedrooms all have en-suite bathrooms and the estate features air-conditioning, swimming pool, hot tub, pond, wood-burning pizza oven and wireless Internet. There’s even the “Diane Lane Room” – named for the actress who plays Mayes in the movie – which offers a stunning view of the countryside.
Get your 17 closest friends together because they will all need to chip in to afford the rental fee which ranges from $14, 580 to $21,870 per week, depending on the season. BUT paid Dream of Italy newsletter subscribers can save $500 per week (hey, that pays for a week of wine!) as Doorways offers an exclusive discount to our paid members.
If you’re looking to rent a villa in Tuscany (whether it be for $1,000 per week or $10,000), our FREE Italy Villa Rentals Report will get you started with tips and tricks as well as a list of our 50 favorite villa rentals and rental agencies!