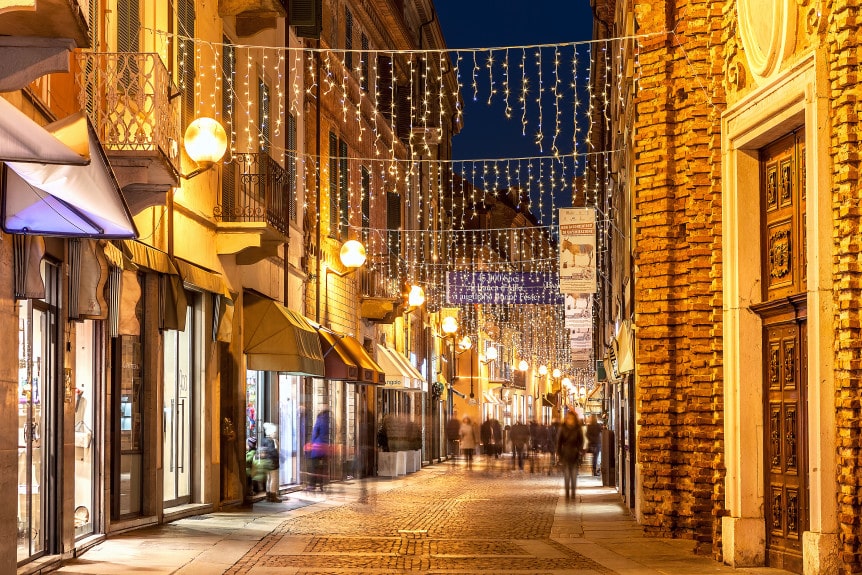 If you’re yearning for an Old World Christmas, there’s no better place to find it than — ahem — the Old World. Though in recent decades the Christmas holidays in Umbria have become more commercialized and adopted many of the trappings of the Anglo-Saxon version — decorative lights, trimmed trees and stockings, and Santa passing on Christmas Eve — enough of the region’s traditions endure to make spending your winter holiday in Italy’s green heart (though she sometimes dons a white coat of snow in December) unforgettable.

Nativity Scenes of All Kinds in Umbria

Following the venerable Mediterranean custom of stretching out any holiday for as long as possible, the Christmas season in Umbria, as in all of Italy, begins with the Feast Day of the Immaculate Conception on December 8 (a state holiday) and doesn’t officially end until the Epiphany on January 6 (another state holiday). Though some stores and public squares may already show signs of the approaching season in November, tradition holds that the focal point of Italian Christmas decorations — the presepe, or nativity scene — be unveiled on La Festa dell’Immacolata, continued with the addition of the baby Jesus on La Vigilia, or Christmas Eve, and not fully completed until the arrival of the Three Wise Men’s figurines at the manger on L’Epifania.

You can hardly turn a corner in Umbria during the holidays without stumbling upon these charming creches, which run from the small, simple manger scene to the gigantic, extraordinarily detailed rendering of entire villages and surrounding countryside, complete with running water fountains, burning cookfires and moving mechanical figurines.

It seems that every shop window, church alcove, and piazza has their own version displayed and I am always surprised and delighted by the hidden creative veins revealed amongst the most reserved of Umbrian neighbors during the holiday season, many of whom spend days on end gathering stones, bark, moss, and fine sand to then construct a rolling landscape populated with tiny statuettes of shepherds, washerwomen, market hawkers, and the Holy Family. Don’t miss these humble, yet humbling, works of art.

The live nativity pageant (presepe vivente) — reenacted by costumed actors either in silent tableau or with spoken dialogue — was first organized in Umbria by St. Francis of Assisi in the tiny town of Greccio in 1223. In part because of this historical connection to the tradition, and in part because the tiny medieval stone hill towns of this region seem built expressly with the aesthetic of a live nativity pageant in mind, many villages still hold living nativity scenes along their winding alleys and alcoves after sunset on Christmas Eve, Christmas Day and the Epiphany. It is worth bundling yourself up against the nippy night air to wander these torchlit streets — often with roasted chestnuts and mulled wine in hand — to see this tradition still much loved by Umbrians after so many centuries.

Christmas in Umbria is an unapologetically religious holiday — this is, after all, a deeply spiritual region in adeeply Catholic country — which is reflected not only in the ubiquitous nativity scenes but also in the centrality of religious services to the Christmas celebration. Christmas season masses are held on December 8th, Christmas Day, December 26th — the Feast of Saint Steven and also a holiday — and January 6th. But of course the most poignant and beautiful Masses are those at midnight on Christmas Eve.

The festive atmosphere, seasonal music (many have special Christmas music programs during the Mass), and pretty evening lighting make it worth the lost sleep. Even if you are not drawn to Mass, you can enjoy wonderful classical music in many of the same cathedrals during their Christmas concert — usually held in the afternoon a few days before or after the 25th. Otherwise, if the thought of one more carol or Handel piece is more than you can bear, shake things up a bit at either the winter edition of the famed Umbria Jazz Festival — held in Orvieto each holiday season.

Shopping and Eating Too, Of Course

Though Umbrians concentrate on the holy during the holidays, they certainly find time for the profane, as well. Shops do brisk business, as the traditional exchanges of farm-fresh eggs, home-raised chickens, and bunches of mistletoe cut by hand from the woods and decorated with red ribbons for good fortune have gradually been replaced by store-bought gifts. You can still find real mistletoe being sold by country women at many village markets (I had never actually seen fresh mistletoe until I spent my first Christmas in Umbria), but it is now used primarily to decorate massive hampers brimming with panettone Christmas cake, torrone nougat with nuts, bottles of spumante, and local Perugina Baci chocolates.

If you’d like to do some gift shopping yourself, head to one of the local Mercantino di Natale, or Christmas markets, held in many main piazzas or historic palazzi in towns across Umbria. These are usually made up of small, wooden stalls where local artists and artisans show their handicrafts and gastronomic wares. The largest in Umbria, Natale in Perugia held in the Rocca Paolina in the provincial capital, features both local artistic and culinary gifts. There are more Umbria Christmas markets including one in Assisi held December 8th to 18th.

For other unique gift ideas, consider visiting one of Perugia’s two historical workshop-museums: Laboratorio Giuditta Brozzetti produces traditional hand-loomed Umbrian fabric in its workshop, the 13th-century San Francesco delle Donne church; or Laboratorio Moretti-Caselli, which is in its 5th generation of stained glass artists who make hand painted glass windows and panels, hand etched glass, and Tiffany glass. Not only will you come away with a one-of-a-kind gift, but also with an understanding of the rich history and culture of local Umbrian craftpeople. (Both of these artisans are featured in the Umbria episode of Dream of Italy on PBS.)

Of course, Christmas isn’t Christmas without good food in Umbria. The mainstay of the traditional holiday lunch in Umbria is cappelletti in brodo, small meat-filled tortellini made with sheets of handmade egg pasta stuffed with a mix of minced chicken, veal, and pork (plus some sausage and mortadella, just in case it’s not meaty enough) and served in an orange-infused capon broth.

Umbrian housewives get together during the long winter evenings weeks before Christmas to keep each other company while their fingers fly, hand-shaping the hundreds upon hundreds of these “little hats” — thus the name cappelletti — they will be serving for Christmas lunch. In case you don’t have access to an Umbrian housewife, many local restaurants feature them on the fixed Christmas Day menu, or they can be purchased in small specialty pasta shops (avoid the grocery store variety) and cooked at home.

Any Christmas meal must be finished off with the ubiquitous panettone, a traditional Christmas cake originally from Milan but wholeheartedly adopted by the Umbrians. Commercial panettone is to handcrafted artisan panettone what fresh basil leaves picked off a sunny windowsill in the Cinque Terre is to that McCormick Spices dried basil flakes your mom had at the back of pantry in 1978 that was so stale it had turned a sad shade of grey.

Don’t waste your time on supermarket panettone, but spring for a heavy round loaf from a good pasticceria. The traditional recipe calls for candied fruit, but if you are like me (and, it seems, 98% of the population) and don’t care for candied fruit, choose a variation with shaved chocolate, raisins, or — my favorite — dried fig and walnut. I never understood what all the fuss over panettone was about until I finally tasted one from the historic Pasticceria Sandri in Perugia. I ate it on Christmas Eve, but the taste was an “Epiphany”!

Rebecca owns and manages the Brigolante Guest Apartments  in the center of Assisi an the countryside nearby.