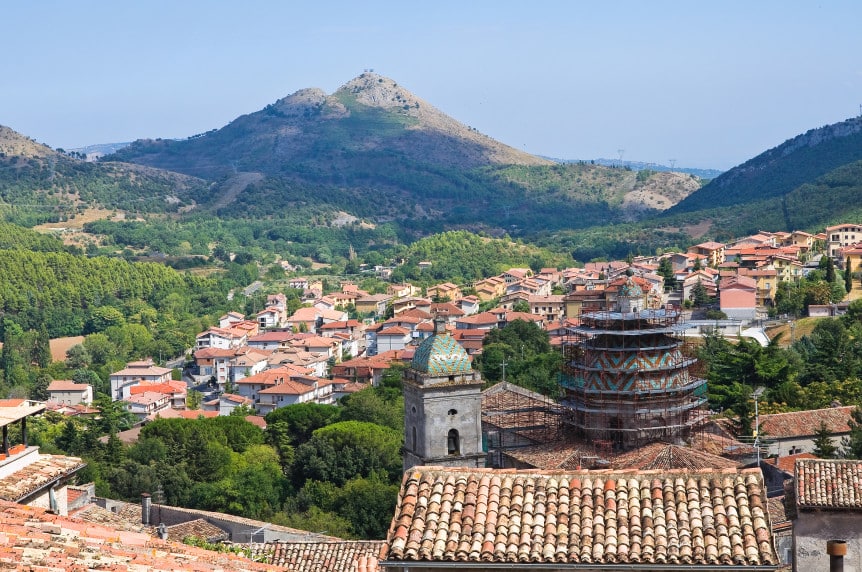 Many Italian Christmas customs know no boundaries, with residents of various regions claiming ownership of time-treasured traditions. This is true of the Feast of the Seven Fishes, the Legend of La Befana, even well-known holiday recipes and dishes. So, here in Calabria, as in neighboring Sicily and various villages throughout the country, the December 13th Festa di Santa Lucia is one more reason to celebrate.

Santa Lucia, or Saint Lucy, whose name means “light” in Italian, is a Sicilian saint who died in Syracuse in the early 300s. Upon seeing an angel while praying for her mother’s terminal illness, she devoted herself to Christianity, refused to marry a pagan and distributed her inheritance to the poor. Her would-be husband reported her to the Romans who, with 1,000 men and 50 oxen, were unable to move or burn her. She died after receiving the Sacrament and her feast day is December 13, the shortest day and longest night of the year.

Although she was born in Sicily, Santa Lucia is adored by Calabrians, who created prayers and proverbs in her honor. One of the most well-known proverbs related to Saint Lucy is:

English translation:
From Saint Lucy’s day to Christmas there are 13 days, But if you count well, there aren’t even 12.

While it is hard to grasp that meaning even with the English language translation, the proverb is referring to the time when Calabrians predicted the following year’s weather by assigning a month to each of the 12 days that passed between Saint Lucy’s Feast and Christmas Day. Favorable weather on December 14 meant January would be a nice month, rain on the 22nd, for example, meant sour weather was in store for September.

Even now, in Altomonte, a village in the province of Cosenza, community members bless and distribute nine varieties of figs, cereals and vegetables to the needy in honor of Santa Lucia, while in Rossano, a Byzantine village 40 miles southeast, 13 types of fruit are given, since Santa Lucia’s feast is celebrated on the 13th.

Villages and towns throughout Calabria still celebrate La Festa di Santa Lucia with fairs and food sagre, most notably in Vibo Valentia, Paola, in the province of Cosenza and in Guardavalle, in the province of Catanzaro. In homes throughout the region, Santa Lucia menus include vino nuovo (new wine produced that year) and 13 types of fruit and sweets, including panicelli, a type of baked raisin and citrus dessert.

La cuccia (rhyming with Lucia), is a traditional southern Italian dolci made with wheat berries and nuts that honors one of Saint Lucy’s miracles in which a ship arrived full of grain after people in Syracuse prayed to the saint for food.

If you’d like to recreate Santa Lucia festivities at home, here is a basic recipe, as well as a slightly sweeter version served with honey:

Directions:
1.    Soak the wheat overnight, changing the water and rinsing it, as necessary.
2.    The next day, place the wheat, butter, bay leaf and salt in a large pot and add enough water to cover all of the ingredients, plus two extra quarts.
3.    Bring to a boil, then lower the flame and simmer, stirring occasionally, for one hour, or until the wheat is cooked. Add additional (boiling) water, as needed.
4.    When the wheat is cooked, drain excess water, remove the bay leaf, cover and refrigerate.

Directions:
1.    Combine one cup of water with the cuccia in a small saucepan and bring to a boil, stirring occasionally.
2.    Pour into individual dishes and serve with honey.

Cherrye Moore is a Calabria travel consultant and freelance writer.  For more on custom itineraries and southern Italy travel planning, visit her website, My Bella Vita.