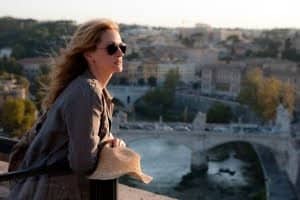 Author Elizabeth Gilbert has charmed many an armchair traveler with her New York Times best-selling memoir, Eat Pray Love. Once achieving what most would call success (a celebrated career, a husband and a lovely home) Gilbert realizes that she has cultivated a life for which she is not completely suited. Gilbert decides to take a year off from her life in New York and truly find herself while spending four months each in three different countries: Italy, India and Indonesia. Julia Roberts plays Gilbert in the screen adaptation of Eat Pray Love, the film, which opens in theaters August 13th. Here are a few tidbits about the book and film connections to Rome Italy:

Last August 17th, Julia Roberts was welcomed with open arms into Italy’s capital city, Rome. Before filming in Naples and then moving on to India and Indonesia, the cast and crew set up shop and filmed in lovely Piazza Navona, Rome’s famous shopping street Via Condotti, and the lovely Borghese Gardens.

During her working Roman holiday, Roberts did not limit herself to one beautiful set of accommodations, but instead she and her family took up temporary residence in two different and highly acclaimed hotels: the De Russie and the Hassler. The movie’s location scouts, who were on the scene months before Roberts, on the other hand, stayed in cozy apartments in central Rome. Il Terrazzo is 10 minutes from either Piazza Navona, Trastevere or the Vatican.

If you’d like the full Eat Pray Love experience in Rome, our friends at Nancy Aiello Tours have put together a Roman walking tour based on the movie. The Eat Pray Love Rome Tour follows the path of Gilbert’s quest for beauty and Italian food through Rome’s Jewish Ghetto and the nearby Tiber Island, Campo de’ Fiori with its lively outdoor food market, Piazza Navona decorated with the baroque Four Rivers Fountain, the Pantheon with its 2,000-year-old dome, Sant’Angelo Castle, the beautiful square of Piazza del Popolo and the peaceful Borghese Gardens, stopping along the way to enjoy Italian gelato while discovering Rome street food and traditional dishes like spaghetti cacio e pepe. All that walking around will certainly put you in the mood for some fantastic gelato! In keeping with the Eat Pray Love theme, you’ll want to visit Gelateria di San Crispino, one of Rome’s most famous gelaterias, which is featured in Gilbert’s book. The Telegraph (U.K.) reports that the gelato shop has been inundated with women travelers carrying copies of the book!