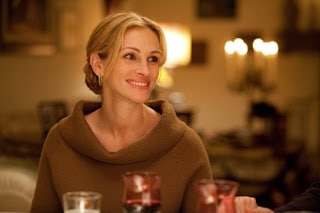 Author Elizabeth Gilbert has charmed many an armchair traveler with her New York Times best-selling memoir, Eat Pray Love. Once achieving what most would call success (a celebrated career, a husband and a lovely home) Gilbert realizes that she has cultivated a life for which she is not completely suited. Gilbert decides to take a year off from her life in New York and truly find herself while spending four months each in three different countries: Italy, India and Indonesia. Julia Roberts plays Gilbert in the screen adaptation of Eat Pray Love. The film which opens in theaters August 13th. Here are a few tidbits about filming in Naples Italy:

The Eat Pray Love cast and crew set out for Naples to film one of Gilbert’s most memorable moments, eating a double mozzarella pizza at L’Antica Pizzeria Da Michele, one of the most famous pizzerias in Naples. Once settled in the southern Italian city, Murphy and other members of the Eat Pray Love team were so touched and inspired by the warmth of the Neapolitan environment that they actually added a scene in Naples. The new scene takes place in one of Naples’ most beautiful churches, Pio Monte della Misericordia.

While on The Oprah Winfrey Show, Julia Roberts gives insight into her personal connection to Gilbert’s story and her experience working on the film. She explains that she felt a relation to the story, ‘It’s the way that [Liz] wrote this book,’ she notes. ‘It’s like a bell that just keeps ringing.’ Roberts also dishes on her love affair with Italian food:

Well, the permission to eat, I think, is a gift. For someone to say: ‘Just eat it. Eat all of it,'” she says. “It always had to be the gusto. Like by the seventh plate of pasta, the gusto became a little more of: ‘Give me a minute. I’m going to look like I like it in just a minute.

In an interview with the U.K.’s Daily Record, Roberts confesses to gaining seven pizza-and-pasta pounds thanks to shooting so many takes:

I’ve always been a friend of food. I probably put on about seven pounds in Rome when we were shooting. I ate a lot of pizzas in Naples. It was just great. But it was hard on take 10 on a giant plate of pasta…It is a challenge and I love a good meal. Someone suggested I had a spit bucket but I can’t do that because it makes me gag. It just grosses me out.