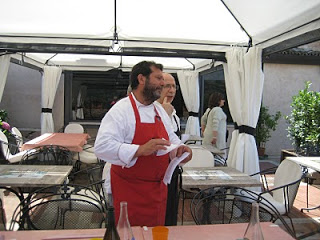 In my book, there’s now one less reason to visit the town of Foligno in Umbria – but Foligno’s loss is Spello’s gain. In Dream of Italy’s Special Report: Umbria, editor Kathy McCabe wrote about the one-of-a-kind chef Salvatore Denaro and his popular trattoria in Foligno.

Salvatore has now closed his quirky and wonderful restaurant Il Bacco Felice and is taking his talent and his enthusiasm for good food and wine on the road. Through September of 2010 (at least at this writing – we’ll keep you posted) you can find him continuing to prepare delicious lunches and dinners in a more picturesque spot….the osteria on the terrace at La Bastiglia Hotel at the very top of the Umbrian town Spello.

From a distance, Spello – the picturesque town on the side of Mount Subasio just east of Assisi – seems to be spilling down the side of the mountain. It often tops the list of places to visit in Umbria: it already had art by Pintoricchio and Perugino (two of Umbria’s native sons), Roman ruins and the famous infiorata. And this summer it has Salvatore Denaro!

Amazing views across the valley have replaced the rows of wine bottles and graffiti-scribbled walls of his small osteria in Foligno. The terrace is large, with tables set up both in the sun and shade. There’s also a 20-seat indoor dining room in case there’s one of the rare days of rain during the Umbrian summer.

And while the setting may have changed, the food and wine – and Salvatore himself – remain the same. There’s still no menu so what you eat will be what is fresh that day, with many of the ingredients coming from his garden just a few kilometers away. On a recent visit, after the prosciutto (“extraordinary”, said Salvatore), we ate panzanella with his ripe, flavorful tomatoes (the man is a tomato genius!) and herbs.

This was followed by a choice of pastas but most of my group took our host’s recommendation and had fresh pasta from a Sicilian recipe with zucchini and mint (again from the garden) and olive oil; this was followed by a slice (“have just a taste,” Salvatore says) of perfectly-cooked porchetta (roast pork, possibly the signature dish of Umbria). Though Salvatore is Sicilian to the core, he has adopted Umbria (and Umbria has adopted him) and incorporates the best of all Italian regional cuisines in his dishes.

Don’t be surprised if an extra wine glass shows up at your table; your host is involved in every level of quality control…down to the bottle of wine just opened for you which he may taste just to make sure it’s good.

La Bastiglia already had a one Michelin star restaurant (which I hope to visit soon with Salvatore as my guide) …and now they have a Sicilian-Umbrian star in Salvatore. — Frances Kidd

La Bastiglia
Via Salnitraria, 15
Spello
(39) 0742 651277
Open for lunch and dinner Wednesday through Saturday. Lunch runs 1 to 3.30 pm and dinner service starts at 8 p.m.
A meal costs 30 euros per person, including one glass of wine.
Reservations strongly recommended, especially on the weekend (specify the osteria or terrace)