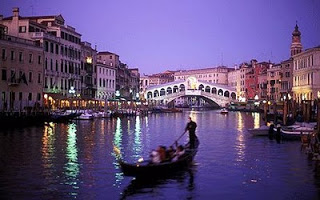 Venice is suffering. Due to severe economic strain, Venice is auctioning off some of its historic palazzi, reports The Telegraph (U.K.) Who is buying these cherished buildings, and what will they do with them? Unfortunately, many of the palazzos are destined to an ill fate. Most will be converted into hotels—certainly not the best option for Venice or the buildings’ owners.

In the past decade, the number of beds available to visitors has grown from 14,000 to a 26,000 while the occupancy rate has dropped to a mere 50 percent. Anna Somers Cocks, the chairman of the UK’s Venice In Peril Fund, believes selling the buildings that line the Grand Canal to research institutes can help Venice and its tourist-based economy to avoid turning into a ghost town with too many hotels.

“Selling off the palaces is an ad hoc strategy driven by panic,” Cocks told The Telegraph. “It’s like auctioning the family silver instead of sorting out your estate. It’s very recent – it’s all happened in the last five years or so. We think it would be much better to offer some of the palazzos to research institutes, for instance.”

If research institutes move in and take on the economic burden of maintaining the buildings, Venice has a chance of profiting from the revenue that the institutes would inevitably bring in. Extra money is something the canal rich city is in desperate need of since most of the city’s revenue is delegated to flood prevention. — Shakira Mongul