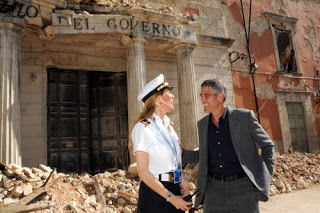 Part-time Italy resident, George Clooney, returned to Abruzzo last week to reshoot a few select scenes from his new movie, The American. The film, based on Martin Booths novel, A Very Private Gentleman, is scheduled hit theaters this September (October in Italy).

Clooney plays Jack, a contract killer who retreats to a charming Italian town after a particularly taxing job in Sweden. Jack informs his contact that this next mission will be his last. His final assignment proves to be a difficult one as well, and by his own doing. Contrary to his normal behavior, Jack befriends the town priest, Father Benedetto (Paolo Bonacelli), and falls for a local woman by the name of Clara (Violante Placido). The thriller offers a bit of a twist towards the end when the identities and motives of certain characters are not as they initially seemed.

After viewing the film in entirety, Dutch director, Anton Corbijn, decided to return to Sulmona, the small city (famous for confetti candy) in the province of L’Aquila, just for a day. However, the cast and crew scheduled two more last minute stops in the area upon arrival—to Castel del Monet and Castelvecchio Calvisio—before their departure on June 23rd.

The return of the Clooney and the cast caused a bit of chaos. Their presence, however, was appreciated. After the devastating earthquake in April of 2009, which killed 300 and rendered thousands injured and homeless, the province can use some serious attention.

According to Italian news agency ANSA, Clooney stated, “filming there was the best way of lending a hand for its recovery.” Clooney is absolutely right. The presence of the cast and publicity of the film will inevitably and monetarily aid the areas reconstruction. — Shakira Mongul