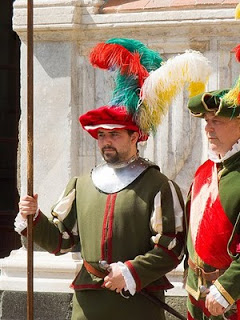 Sometime in the 6th century, the city of Florence replaced their first patron, or protector (God Marte), with San Giovanni Battista (John the Baptist) In honor of their patron saint, Florence puts on an annual four-part celebration for residents and tourists alike each June 24th. The day’s events include a parade, a particularly violent soccer match, a flag waving show and finally fireworks!

The Parade: Piazza della Signorina is great place to watch the day’s commencing activity. There you can view the fabulous display of participants dressed head to toe in 15th-century garb. The colorful and ornate attire is a tribute to the Florentine aristocratic families, military, tradesmen, musicians, etc.

The Soccer Match: The shirtless, padding-free players are revealed towards the end of the procession. The game, known to the Italians as calcio storico, takes place in a makeshift arena constructed for the occasion in Piazza Santa Croce. The historical game, a traditionally aggressive one, used to have only one rule—it was prohibited to kick an unconscious player in the head. In 2006, a few safety rules were instated after one player’s ear was ripped off during the match.

The Flag Show: Once the parade makes its way back to Piazza della Signoria, the flag throwing, waving, and catching takes place. The spectacle is enhanced with acrobatic stunts preformed by the flag throwers themselves while dressed in authentic, Florentine attire. Crowds of people are entertained with music in the square until night falls over Florence.

The Fireworks: Ponte Santa Trinita is the best place to catch a glimpse of the fireworks over the Arno River. It is by nightfall when the people who have been hiding in their homes in attempt to avoid the crowds give up and emerge from their various domains and finally join the fun. — Shakira Mongul

Want to find out what else is going on in Italy this summer? Visit Dream of Italy’s Italy events calendar…
Photo by mihr*, flickr.com