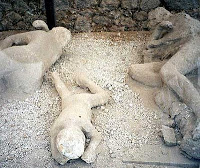 A new exhibit dedicated to Pompeii’s destruction opened this weekend, according Italian news agency ANSA. The exhibit is located at the entrance to the Pompeii site and contains five parts, each of which gives visitors a glimpse into the city’s fateful final hours. The exhibit incorporates archaeological evidence, virtual reproductions, films, photos, and ancient documents to realize the devastation that Mt. Vesuvius caused when it erupted on August 24, 79 A.D.

The first part of the exhibit aims to educate visitors about the large scale of volcanic destruction of the town of Pompeii, and remind the public that active volcanoes still pose. Mt. Vesuvius, the only mainland volcano in Europe to have erupted in the last century, is still considered an active volcano, and this exhibit allows visitors to explore the area’s relationship with Vesuvius and the damage caused by the volcano’s subsequent eruptions.

A display called “The Last Day of Pompeii” comprises the second part of the exhibit, using literary and historical narratives, visual aids, scientific accounts, and simulated reconstructions to express the tragedy that occurred when Mt. Vesuvius erupted. The next section focuses on the history of the site’s excavation and its various stages from 1748 until the present, while the fourth part allows visitors to put together a personal itinerary to guide them through their visit to Pompeii. The last section, entitled the “Experience Laboratory,” contains educational materials that will bring Pompeii to life for visitors, including a vibrating seismic table that simulates an earthquake.

The current exhibit runs until August 1st, but will eventually become part of the site’s permanent exhibit. — Elaine Murphy