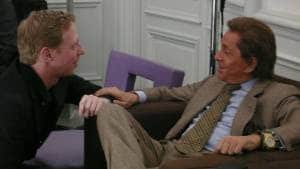 Editor’s note: As any editor would be, I was ecstatic when Matt Tyrnauer, special correspondent for Vanity Fair, wanted to write for my humble publication Dream of Italy. What a thrill! Here is an excerpt from the piece he wrote for our December/January issue.

As with any film production, there were moments of extreme difficulty during the making of my recent documentary, Valentino The Last Emperor (now available on DVD). Principle photography on the movie took place in 2007 and 2008, and, for those twenty-four months, my crew and I shadowed the maestro of Italian high fashion at work and at play, mostly in Europe, where Valentino has homes in Italy, Switzerland and England. The city in which we spent the most time was Rome, where Valentino, until his retirement in July of 2008, had his fashion house and main residence.

Valentino was a challenging subject for a filmmaker. He is a perfectionist with very high standards, and very little patience for anyone’s agenda but his own. Though he had agreed to be the star of my movie, I am quite sure that he did not know how challenging a film shoot can be when he agreed to take the staring role. Film shoots go haywire: There are moments of frustration as equipment misbehaves. There are soundmen, and P.A.s and grips and producers and wires and cables and scuffed metal cases laying about.

All of this chaos imposed on the designer’s otherwise very ordered, and aesthetically correct world, caused more than a few meltdowns. The star on more than one occasion, quit the movie, which was rather inconvenient, as tens of thousands of dollars were being spent on every shoot. Even in the final cut, you can see Valentino furiously declaring his departure from the set.

I am often asked if the stress got to me, and, if so, how I dealt with it. My usual answer is, “downward dog.” I intensified my yoga practice during this time.

But the real answer is that, as long as we were filming in Rome, which was the majority of the time, I was fine. The film crew was always relieved when things went wrong in Rome, because I was always in a Zen-like state of calm. As my producer, Matt Kapp, frequently said to me, “There is no explaining how much you love this city. You are a different person here.” I like to think I am relatively even-tempered no matter where I am, but something about Rome fascinates me endlessly, and also amuses and soothes me.

I can occupy myself in any Roman street at any time of day or night, staring at the pattern of the blue-gray paving stones, or inspecting the elegant font used for the signs above the stores, or giving myself an Italian spelling lesson, looking at the ubiquitous professional nameplates: “Psicologo” “Ortodontista,” “Veterinario”. Then there is the endless parade of Roman characters: Elegantly suited business men with their carefully knotted ties, the street sweeper in his stylishly worn coveralls, the gaggle of nuns, the pair of priests, the grandma in her cardigan and sensible shoes, the elegantly uniformed Carabinieri. It is all “Felliniano,” as the Italians say.

On a typical day when I saw my movie melting down around me, I would suggest to Fred Tcheng, the co-producer of the film, that we take a walk from the fashion house, next to the Piazza di Spagna, across town, to Piazza Vittorio Emanuele II, where the crew apartment was located. Along the way, we would stop in a bar for aperitivo, and, further along the route, stop for dinner in a ristorante or a trattoria.

Paid subscribers: Read the rest of Tyrnauer’s article where he talks about Valentino’s favorite restaurants and the 10 Roman eateries Tyrnauer frequented while living in Rome

Purchase an immediate digital download of the issue containing this article