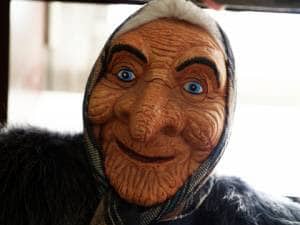 Susan Van Allen, author of 100 Places in Italy Every Woman Should Go, shares the Italian legend of La Befana and why Italian children are eagerly awaiting her arrival this week:

“There is no Santa Claus in Italy,” my Nana told me when I was a kid. I had nightmares of how awful Christmas must be for children over there, where Nana was born. Nana said she had to wait until January 6, The Feast of the Epiphany, to get gifts.

The presents came from an old crone with a hairy mole on her chin who rode around on a broom. She was called La Befana. Many years later, I’m at the Piazza Navona in Rome, at the Epiphany Fair. It is two weeks after Christmas, but the celebration is still in full swing. Bernini’s Fountain of the Four Rivers is surrounded by stands with twinkling white lights selling sweets, ornaments, and roasted pork sandwiches.

Nowadays, there is Santa Claus in Italy. They call him Babbo Natale. He’s skinnier than our version, and figures of him hang off the booths, side by side with the crone from my nightmares: La Befana. Tonight, January 5, I tell my husband, is La Befana’s special night. He looks between Babbo Natale and the crone and says, “If I saw that one coming down my chimney, I’d run the other way!”