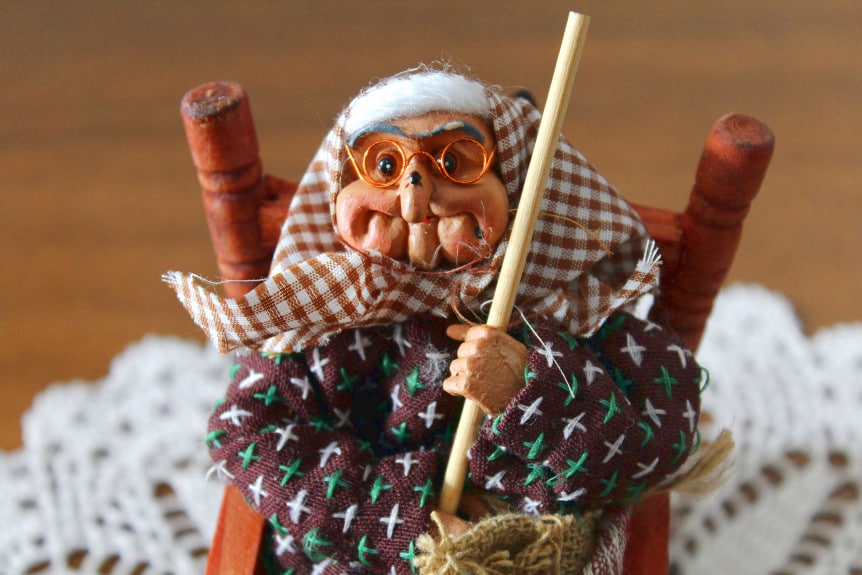 “There is no Santa Claus in Italy,” my Nana told me when I was a kid. I had nightmares of how awful Christmas must be for children over there, where Nana was born. Nana said she had to wait until January 6, the Feast of the Epiphany, to get gifts. The presents came from an old crone with a hairy mole on her chin who rode around on a broom. She was called La Befana. Many years later, I’m at the Piazza Navona in Rome, at the Epiphany Fair. It is two weeks after Christmas, but the celebration is still in full swing. Bernini’s Fountain of the Four Rivers is surrounded by stands with twinkling white lights selling sweets, ornaments, and roasted pork sandwiches.

Nowadays, there is Santa Claus in Italy. They call him Babbo Natale. He’s skinnier than our version, and figures of him hang off the booths, side by side with the crone from my nightmares: La Befana. Tonight, January 5, I tell my husband, is La Befana’s special night. He looks between Babbo Natale and the crone and says, “If I saw that one coming down my chimney, I’d run the other way!”

La Befana, like my Nana, was famous for spending her days in the kitchen, cooking and sweeping. On the first Christmas, the Magi stopped by her house, asking directions to Bethlehem. She made them dinner and they told her, “We’re going to see the Christ child, want to come along?” “Impossible,” she replied. “There’s all these dishes to wash and the kitchen to sweep!” So the kings went on their way. Then, as the old woman was sweeping, it hit her: Did those guys say they were going to see Jesus?

She ran out of her cottage with her broom to follow them, but… no kings in sight. She kept running, until her broom lifted her into the air. Ever since, La Befana has flown through the night sky on the Eve of the Epiphany, delivering goodies to children, hoping one of them is the Christ child.

Anticipation is in the air here in the piazza, as kids hurry home to hang stockings and set out a glass of wine for La Befana. She knows no child has been perfect all year, so tomorrow morning they’ll find their stockings filled with a mix of treats – coal (actually delicious black rock candy), maybe onions, olive oil… and finally they’ll dig to the bottom and find chocolates and caramels.

Who could not adore this ordinary woman, caught in the midst of her ordinary world, suddenly struck by the Epiphany, dropping everything to run and be a part of it?

I think about my friends in Los Angeles, who have already hauled their trees out to the curb and are back at work, feeling guilty about weight they’ve gained from holiday partying.

We don’t feel guilty at all. We’re in Rome and we do as the Romans do. We slip into our favorite café, Tre Scalini, and order tartufo – crunchy chocolate ice cream encrusted in hard chocolate. The nightmares Nana gave me so long ago are gone. We buy our Los Angeles friends Befanas, wanting to share with them the spirit of this Christmastime bonus; wanting them to believe as Italians believe, as we believe: that La Befana will fly through the sky tonight, sweeping away last year’s troubles with her broom, bringing us the hope of a sweeter, brighter new year. Anything is possible.

A frequent contributor to Dream of Italy, Susan Van Allen is the author of 100 Places in Italy Every Woman Should Go, just released in its third edition.